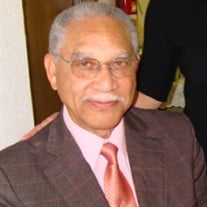 Willie Frank Allen was born on May 5, 1935 to Moses and Mary Allen in Greenville, South Carolina. He had 4 older brothers – Clyde, Hayward, Fred, and Arthur and 3 sisters – Ruth, Helen, and Doris, now all deceased. After the death of his mother, he moved to New York to live with his oldest sister Ruth, who raised him. In 1954, he enlisted in the United States Air Force where he served in Korea and eventually was stationed at Vance Air Force Base in Enid, OK. This is where he met and married the love of his life of 48 years, Dorice Wiley. Willie Frank enjoyed spending time with Dorice’s family. During this time, he accepted the Three Angel’s Message and was baptized into the Seventh-day Adventist Church. He played a very active role in church and faithfully served in various capacities including Local Elder, Church Treasurer, and member of the Southwest Region Conference Executive Committee. He conducted evangelistic series and Bible studies in Watonga and Enid, OK. He was instrumental in the acquisition and remodeling of several church buildings. Willie Frank was very active in his community and served as Board Chairman for Enid’s Booker T Washington Community Center. He ran a vigorous campaign for Enid City Council and worked alongside his wife, Dorice, on many community projects. He is survived by his three daughters - Joyce (Milo), Robin, and Pamela, sister-in-law Kathleen Wiley, childhood friends Lamar Ramsey (Willa) and Thomas Biggins (Connie), faithful caregiver Maria Ayala, and extended family and friends. A memorial service will be held to remember and celebrate Willie's life on Friday, November 9, 2018, at 4:00PM, at Crawford Family Funeral Home in Edmond, OK. Terrell McCoy, Senior Pastor, will be officiating. Burial will take place at Memorial Park Cemetery in Enid, OK on Saturday, November 10, 2018, at 2:00PM. In lieu of flowers the family would please ask you to make a donation to the Voice of Hope Seventh-day Adventist Church building fund. Contact information is posted below for donations. Voice of Hope Seventh-day Adventist Church 3300 NE 23rd Street Oklahoma City, OK 73121 (405) 600-6780 http://www.voiceofhopeokc.org/

Willie Frank Allen was born on May 5, 1935 to Moses and Mary Allen in Greenville, South Carolina. He had 4 older brothers &#8211; Clyde, Hayward, Fred, and Arthur and 3 sisters &#8211; Ruth, Helen, and Doris, now all deceased. After the death... View Obituary & Service Information

The family of Willie F. Allen created this Life Tributes page to make it easy to share your memories.