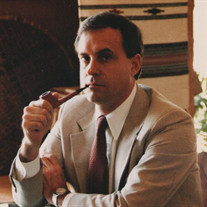 On September 25, 2019, William Harold “Bill” Castor, loving father, grandfather, brother, and uncle, died at the age of 76 in Edmond, Oklahoma. Bill was born on August 8, 1943, in Oklahoma City, Oklahoma to Harold Chester Castor and Delia Catherine (Franklin) Castor. For most of his childhood, Bill and his older sister, Adelia Nell (Castor) Hanson, were raised by his mother, Delia, and her parents, Dr. William Albert “W.A” Franklin and Nell Lois “Nellie” (Baker) Franklin in Ponca City, Oklahoma. Bill graduated from Ponca City High School in 1961, Oklahoma State University in 1965, and the University of Oklahoma College of Law in 1968. On August 28, 1965, Bill married Carol Jean Morrison, and they raised one son, William Franklin “Will” Castor. In 1969, Bill, Carol, and Will moved to Vinita, Oklahoma, where Bill practiced law and Carol became an accomplished professional artist. Bill was a partner at the Vinita law firm, Logan & Lowry, before moving on to solo practice and then the Vinita law firm, Pitcher, Castor & Hartley (later, Rorschach, Pitcher, Castor, Hartley & Jones). In later years, Bill practiced law in Pryor and Tulsa. Bill received Martindale-Hubbell’s AV rating, which is the highest level of professional excellence at which an attorney can be rated by his peers. Bill was also appointed by Oklahoma Supreme Court Justice Robert E. Lavender as an Associate Examiner for the Board of Bar Examiners, proudly serving in that position from 1979 to 1990. While Bill loved practicing law, it paled in comparison to his passion for his family and friends. Besides visiting with his loved ones, Bill also enjoyed going to OSU football games, fishing, traveling, studying the Bible, and following politics. While he could be very serious, Bill also had a great sense of humor and an infectious laugh. Bill was preceded in death by his father, Harold, his mother, Delia, his grandfather, W.A. Franklin, his grandmother, Nellie Franklin, his sister, Adelia Nell (Castor) Hanson, and his stepmother, Amanda Castor. He is survived by his son and daughter-in-law, Will and Dorothy “Cookie” Castor, his step-grandchildren, Bobby Rake (Jenn), Chris Rake (Mandie), and Katie Rake (Eli), his grandchildren, Lindsey Castor and Malachai Rake, his sisters, Roberta Castor and Vicki Waters (Dennis), his brother, Douglas Castor, his brother-in-law, Bertil Hanson, his nephews, Jon Hanson (Emily) and Peter Hanson (Cata), and his many beloved Franklin cousins. Bill’s family would like to thank the staff at The Timbers (formerly Grace Living Center), Edmond, Oklahoma, where Bill spent his final years, and the staff at Good Shepherd Hospice, who attended to Bill in his final days. A service celebrating Bill's life will be at 1:30pm on Monday, September 30th at Crawford Family Funeral Service, Edmond with burial following at Memorial Park Cemetery, OKC.

The family of William H. "Bill" Castor created this Life Tributes page to make it easy to share your memories.

Send flowers to the Castor family.