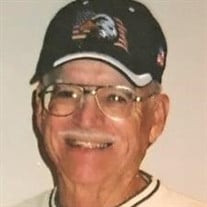 Willard Earl Baker, Jr, of Oklahoma City, OK passed away on August 5, 2019. He was born on June 28, 1939 to Willard and Marie Baker of Oklahoma City, OK. While growing up in Oklahoma City, he played little league baseball, had a large paper route and was an active member of Western Hills Baptist Church. Willard also became an active member of the Boy Scouts of America, not only achieving the rank of Eagle Scout but persevered to attain his God and Country award. Willard graduated from Southeast High School in 1957 where he met Rita Gayle Cope. They were married on May 1, 1959. They resided in Oklahoma City where they raised four children. He attended Oklahoma City University and received his Associates Degree in Business. Willard enlisted in the United States Army in 1957, completed his basic training and remained active in the Army Reserves with over 30 years of service when he retired with the rank of Master Sgt. He began his professional career in 1958 with Western Electric that later became known as AT&T. Willard was an avid hunter, excellent golfer and enjoyed fishing. He was also a long-time member of the Western Gun Club where he excelled in the areas of trap, skeet and sporting clays. In addition, he was an expert marksman with a bow and arrow. In his later years, he enjoyed riding motorcycles, as well as, becoming a CLEET certified instructor and conducted courses for the Concealed Carry Law. He was a great mechanic, very capable with his hands and could fix and build most anything. He was preceded in death by his parents and his wife. He is survived by: daughter Stephanie Freeman and husband Glenn Freeman of Haslet, TX; daughter Tracey Swan and husband Sheldon Swan of Edmond, OK; son Dean Baker of Edmond, OK; daughter Carrie Morris of Edmond, OK; sister Dona Wadsworth of Dalton, AR; brother David Baker of Livingston, TX. In addition, he leaves behind four granddaughters; four grandsons and one great grandson. Services will be August 12, 2019 at 11am at Crawford Family Funeral Home in Edmond, OK. A visitation will be held on August 11, 2019 from 5:30 to 7:30 pm.

The family of Willard Earl Baker Jr. created this Life Tributes page to make it easy to share your memories.