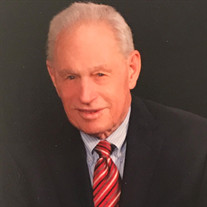 Wight W. Jones was called home by his Lord on Thursday, March 7. He was born in Chickasha to Ralston and Inez (Williams) Jones and raised near Marshall. He was known for his gentle humor and formidable athletic talent. Wight received his business degree in Marketing from Oklahoma A+M where he met Joyce Tontz, his beautiful bride of 66 years. Dad enjoyed a long and rewarding career with Mobil Chemical and was responsible for the successful national launch of the Mobil Marketote® Bags. His work enabled his family to enjoy adventures everywhere we lived including Oklahoma, Texas, and New York. Dad was an avid golfer and was happiest when he played in the Cowboy ProAm Tournaments in Stillwater. He was a proud OSU Cowboy who instilled a reverence for “all things Orange” in his beloved children and grandchildren. He was a patron of the academic and athletic departments and was a season ticket holder for the Men’s Football and Women’s Basketball teams. He was kind and thoughtful – a good man – a gentleman. He was a Christian in his faith and his actions serving as a deacon and Sunday School director in his church. He has reunited with family members who passed before him including his mother (Inez Williams Jones), father (Ralston), and brother (Ralph). Wight is survived by his wife Joyce, son Rev. Mark (Diane) Jones of Staunton, VA, daughter Dr. Ann Jones of Tucson, AZ; grandchildren Sierra (Doug) Wheatley, Garrett Jones, Matt Davis, and Rhys Davis; brother Joe Jones, sister, Elizabeth (Charles) Bodine, sister-in-law Kathryn Jones, cousin Bill (Jane) Williams; Dr. Gary and Rosalie Rahe, Ruth Tontz, and myriad nieces and nephews. The family will receive friends at Crawford Funeral Services – 610 NW 178th St. Edmond, OK. Tuesday, March 12 from 6:00-8:00. The funeral service will be Wednesday, March 13 at First Baptist Church of Edmond – 1300 East 33rd St in Edmond. There will be a graveside service at 2:00 at IOOF Cemetery – EO570 Rd, Marshall, OK. Memorials can be given to the Oklahoma Baptist Homes for Children.

Wight W. Jones was called home by his Lord on Thursday, March 7. He was born in Chickasha to Ralston and Inez (Williams) Jones and raised near Marshall. He was known for his gentle humor and formidable athletic talent. Wight received his business... View Obituary & Service Information

The family of Wight W. Jones created this Life Tributes page to make it easy to share your memories.

Wight W. Jones was called home by his Lord on Thursday, March...