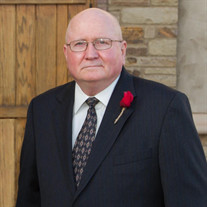 Marvin Wayne Stewart was born on January 21st, 1949 in Oklahoma City, OK to Marvin and Bernadine Stewart. Wayne was blessed to grow up in a Christian home and accepted Jesus as his Savior at the age of 8. He graduated from Deer Creek High School as Salutatorian in 1967. In school, he played sports including basketball and baseball, played coronet in the band, and sang in the chorus. Wayne graduated from Central State College in 1971 with a degree in education (and even lettered in track). He taught math and history and coached at Marlow schools. Two years later he transitioned to working as a trim carpenter. He worked as a trim carpenter for over 15 years, many of the homes in Northwest Oklahoma City still hold the mark of his trade. He spent the remainder of his life working in the insurance industry, both as an insurance agent and later as an analyst for the Oklahoma Insurance Department. He married the girl of his dreams, Ruth Elaine (Blair) Stewart on December 20, 1968. They had 52 wonderful years together and made a big happy loving family, with a home always full of laughter, togetherness and delicious food. Wayne is preceded in death by his parents, Marvin Monroe and Bernadine Faye (Allman) Stewart and brother, Mark Stewart. He is survived by his wife, Ruth Elaine Stewart, his five children and their spouses: Mike and Sabrina Stewart, Buck and Becky Jenkins, J.D. and Amy Gwartney, Justin and Megan Rogers, Kyle and Lindsay Stewart; 15 grandchildren and 2 great-grandchildren, and his brother and sister-in-law, Terry and Sally Stewart. Wayne loved to go to church and was involved in various church activities. He served in many different capacities over the years including as a music leader, Bible study teacher, and deacon. Wayne read his Bible and prayed every morning. When the kids lived at home, the family had a Bible reading time before they went to bed each night. He provided his family with an exceptional example of faith and service to the Lord. He believed in the importance of tithing and attending church. He always followed the rules and did what was right. He had a strong work ethic that he learned from his father. He was a good provider, husband and father. He loved going on cruises and always looked for a good deal on the next cruise (he was very frugal). He had a sweet tooth, and he loved receiving black licorice as a gift for birthday or Christmas. Wayne enjoyed talking to family and friends and was known to carry on conversations for long periods of time. He loved his wife and his family. He was proud of everyone’s accomplishments and talents. He loved to watch his kids, and later his grandkids, participate in any of their activities. He was very present and supportive. He would always send them a congratulatory text to let them know how proud he was, and the text always ended with many emojis. He had many inventive nicknames for family members. He had a unique talent for making us laugh with a joke, funny story or a silly song that he made up. He loved to tease his grandkids about their boyfriends or girlfriends, even if they didn’t have one yet. He was always quick to let his grandkids know they got their good looks for him. A service celebrating the life of Wayne will be held at 10 a.m. at the Putnam City Baptist Church, 11401 N. Rockwell Ave. Oklahoma City, OK 73162. Services celebrating the life of Wayne will be held on Thursday, January 7, 2021 at 10 a.m. at the Putnam City Baptist Church located at 11401 N. Rockwell Ave., Oklahoma City, OK 73162. In lieu of flowers, memorial donations honoring the life of Wayne can be made out to the Putnam City Baptist Church.

Marvin Wayne Stewart was born on January 21st, 1949 in Oklahoma City, OK to Marvin and Bernadine Stewart. Wayne was blessed to grow up in a Christian home and accepted Jesus as his Savior at the age of 8. He graduated from Deer Creek High... View Obituary & Service Information

The family of Wayne Stewart created this Life Tributes page to make it easy to share your memories.