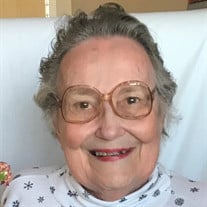 Wanda Standlee Buechler, formerly of Wichita Falls, Texas, peacefully passed away on March 16, 2020, at Touchmark Assisted Living in Edmond, Oklahoma. She was 89. Wanda was born in Cleburne, Texas, on June 21, 1930, to Earle Glenn and Mary Walker Standlee. Her father was a career Army officer and physician, and she moved around frequently in her youth. She graduated from high school in Washington D.C., where her father was then stationed. She attended Baylor University in Waco, Texas, and later graduated from the University of Maryland with a Bachelor’s degree in Elementary Education, following which she taught second grade at the National Cathedral Elementary School. On April 11, 1953, she married Theodore Bruce Buechler, a graduate of West Point Military Academy and an Air Force Captain, at Fort Monroe, Virginia. Over the ensuing 25 years, they were stationed in New York, Alabama, Illinois, and several cities in Texas, as well as overseas tours in England and Iran, while rearing their four children. She moved with her husband to Sheppard AFB in Wichita Falls, Texas, in 1973, where they later retired in 1978. Over the years, they cultivated many deep and lasting friendships in both the Air Force and civilian communities. She was very involved in the Sheppard AFB Officers’ Wives Club, and was a weekly volunteer at the Sheppard AFB Thrift Shop for 30 years. They were active members of St. John the Divine Episcopal Church in Burkburnett, Texas, Episcopal Church of the Good Shepherd in Wichita Falls, and St. Stephen’s Episcopal Church in Wichita Falls. Wanda was predeceased by her parents and her two brothers. She was also predeceased by her husband of 50 years, Bruce, on December 7, 2003. She is survived by her four children, Bruce Earle Buechler (and wife, Mary) of Leawood, Kansas, Grace Buechler Rooney (and husband, James) of McKinney, Texas, Robert Rhey Buechler (and wife, Lori) of Tulsa, Oklahoma, and Bethany Buechler Courtney (and husband, Gary) of Edmond, Oklahoma. She is also survived by her seven grandchildren, Kevin Rooney, Rachel Rooney Gorgas, Margaret Courtney, Jack Courtney, Scott Courtney, Mary Buechler, and Anna Buechler, as well as one impending great grandchild, Levi Gorgas. Wanda was a believer in the Lord Jesus Christ, a joyful, happy, kind soul and was deeply grateful of the loving care she received during her last four years from the staff of Touchmark in Edmond, OK, as well as from Accentra Hospice during her final weeks. She had a deep respect and appreciation for all, with whom she came in contact. Her infectious laugh and love of others were hallmarks that reflected her zeal for life. Wanda will be laid to rest beside her husband, Bruce, in Grand Island Cemetery, Grand Island, Nebraska. Memorial donations in the honor of Wanda may be made to Accentra Hospice, 2028 E Memorial Rd, Edmond, OK 73013 or by calling (405) 840-7775.

Wanda Standlee Buechler, formerly of Wichita Falls, Texas, peacefully passed away on March 16, 2020, at Touchmark Assisted Living in Edmond, Oklahoma. She was 89. Wanda was born in Cleburne, Texas, on June 21, 1930, to Earle Glenn and Mary... View Obituary & Service Information

The family of Wanda S. Buechler created this Life Tributes page to make it easy to share your memories.

Send flowers to the Buechler family.