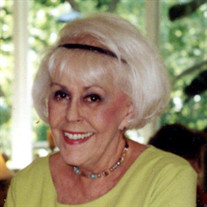 A vigil for Mrs. Hogue will be at 6:30pm on Monday, August 3rd at St. Monica Catholic Church. Mass of Christian burial will be at 10:00am on Tuesday, August 4th at St. Monica Catholic Church with final committal following at Resurrection Memorial Cemetery in Oklahoma City. Virginia Carole Robinson Hogue left her earthly bounds to join the Lord on July 27th, 2020. Virginia was born at home to Loren Larkin and Gertrude Elizabeth Robinson on August 23rd, 1934 in Duncan, Oklahoma. The family later moved to Oklahoma City where she attended Catholic High School. After graduation she enrolled in The University of Oklahoma where she pledged and joined the Epsilon Alpha chapter of the Chi Omega sorority. It was at The University of Oklahoma that “Ginny” met, and married, Robert James Hogue Jr. in 1956. Bob and Ginny had two sons, Robert James Hogue III and Jerald William Hogue. Following college Ginny attended Radiology school at St. Anthony’s Hospital and graduated as a Radiological Technologist and worked 20+ years in the field. After leaving radiology she worked several years as a retail store manager which she followed with a career in real estate before retiring to pursue her most beloved job … caring for her grandchildren. In her retirement she also sought to deepen her catholic faith through prayer, devotion and forming the Medjugorje prayer group at St. Monica Catholic Church. Virginia was preceded in death by her husband, Robert James Hogue Jr., M.D.; her parents, L.L. and Gertrude Robinson; and her sister, Marion (Robinson) Fry. She is survived by two sons, Robert James Hogue III and Jerald William Hogue and his wife, Angela, all of Edmond; and her sister, Kathleen (Robinson) Billington of Ponca City. She is also survived by five grandchildren, Taylor Siron and her husband Elijah of Portland, Oregon, Rachael Lee and her husband Derek of Edmond, Robert Hogue IV of Edmond, Cheyenne Hogue of Edmond and Amanda Wells and her husband Jason of Goldsby, Oklahoma. Virginia was also expecting her first great grandchild, Owen Lee, in September. Virginia will forever be loved and missed by her family and friends.

The family of Virginia Carole Hogue created this Life Tributes page to make it easy to share your memories.

Send flowers to the Hogue family.