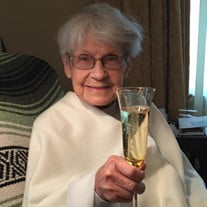 Vinita Inez (Dronberger) Lee, 98, of Edmond, Oklahoma, left this Earth to be with her Lord. She was born on January 13, 1922 in Billings, Oklahoma, to parents Otis Jay Dronberger and Effie Leona (Phenis) Dronberger. She was born and raised on an oil and gas field. A few years after Vinita was born, she became a proud older sister to her kid brother, Bobby. She adored her brother and they did everything together. In 1940, she graduated from Seminole High School and then went on to attend Oklahoma State University. She graduated with her bachelor's degree in education and started teaching in a single room schoolhouse during World War II. The eldest student she taught was in the 8th grade, and he exceeded her height. In April 1944, Vinita married the love of her life, Charles Lee. They had three children; Charlee, Steven, and Brenda. During Vinita and Charles' life together, they moved around quite often. She was a master at packing up a family of five, or more including all of the pets they had, in one suitcase. Vinita was a woman of many trades. She was a teacher, a beauty consultant selling Fashion 22 Cosmetics, and most of all she truly enjoyed being a mom. She was also a master at cleaning. She always said the cleaning is never finished unless you used a toothbrush, a q-tip, and a toothpick, in that order specifically. A hobby she loved was playing the violin and writing poetry. She enjoyed all different genres of music, especially classical music. A hobby that Vinita and Charles shared was going out to auctions, estate sales, and purchase collectibles. She always would find something she had to have. After retirement, she and Charles moved back to Oklahoma so she could become a caretaker to both of her parents. She then eventually became a full-time caretaker to her loving husband. Vinita is preceded in death by her loving husband, Charles, her eldest son Charlee, and her parents, Otis and Effie Dronberger. She is survived by her son Steven, her daughter Brenda, her grandchildren, and her great grandchildren. Vinita was a wonderful and loving person that will be truly missed, but will live on forever in our hearts. In lieu of flowers, a charitable donation in honor of Vinita Lee made to the Parkinson's Foundation is greatly appreciated. Parkinson's Foundation of Oklahoma, 720 W Wilshire Blvd #109, Oklahoma City, OK 73116 https://parkinsonoklahoma.com/donate/ Come-and-go visitation for Vinita will be held on Thursday, June 4, 2020 from 9 a.m. until 8 p.m. with the family to greet friends at a reception from 6 to 8 p.m. at the Crawford Family Funeral Service Chapel. Graveside services will be held on Friday, June 5 at 10:30 a.m. at Grace Hill Cemetery in Perry, Oklahoma.

Vinita Inez (Dronberger) Lee, 98, of Edmond, Oklahoma, left this Earth to be with her Lord. She was born on January 13, 1922 in Billings, Oklahoma, to parents Otis Jay Dronberger and Effie Leona (Phenis) Dronberger. She was born and raised on... View Obituary & Service Information

The family of Vinita Inez Lee created this Life Tributes page to make it easy to share your memories.

Send flowers to the Lee family.