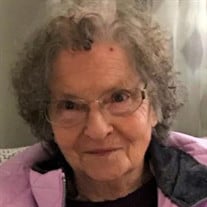 Vida Opal (Thomas) Anderson, 86, of Norman, OK, passed away peacefully, Thursday, June 18, 2020 at Medical Park West in Norman, OK. Vida was born February 24, 1934 to Ollie and Modena (Alderdice) Thomas and was one of 8 children. Vida spend most of her early years growing up in Hickman, KY where she would meet and later marry the love of her life, Ralph Anderson on November 25, 1951 in Alcorn, MS. Following Ralph’s service in the United States Army, the couple would move to Amarillo, TX, which would be home for Vida, Ralph, and their family, until Vida moved to be closer to her daughter-in-law Rebecca in Norman, OK, in recent years. Vida had many hobbies in life but most often could be found tending to her garden, cooking, embroidering, and playing bingo. But nothing brought Vida more joy than being a grandma and great-grandma and spending time with all her grandchildren and great-grandchildren. Vida was a beautiful woman and will be missed dearly by all. Proceeding Vida in passing is her husband, Ralph; and sons, Johnny Edward, James Holley, and Ralph Jr. Surviving Vida is her sister, Teenie Williams of Jones, OK; brother, Cecil Thomas of Hickman, KY; her daughter-in-law Rebecca J. Anderson of Norman, OK; grandchildren, John David Anderson and wife Kimberly of Amarillo, TX, Donnie Anderson and wife Melissa of Norman, OK, and Brian Anderson of Norman, OK. Also surviving Vida are her 6 great-grandchildren and many other family members and friends. The family of Vida will be holding a private family graveside service at Llano Cemetery in Amarillo, TX to remember and celebrate her life.

The family of Vida Anderson created this Life Tributes page to make it easy to share your memories.