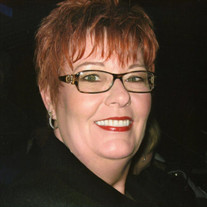 Vicki LaRue Stewart, 66, of Oklahoma City departed from this Earthly world to join her heavenly Father on December 9, 2020. Her transition from Earth was unexpected and has left a void in the hearts of those that loved her. Vicki was born December 28, 1953, in Ft. Sill, Oklahoma. She was the first-born family child; 18 months older than her sister, Toye. Growing up, Vicki and Toye were partners in crime, and had a love for horses. Vicki took her big sister responsibilities very serious. She was very protective; and rumor had it if you messed with Toye, you would answer to Vicki. Growing up, their father worked many hours, and the girls were a full-time job and fun handful for their mom. The stories of fun adventures, love, and laughter are endless. As a young child, Vicki knew Christ, and was baptized. She spent many days discussing the Bible and her faith with family and friends. She was a true servant to her Lord. At the ages of 17 and 16, Vicki and Toye worked as nursing aides at Grady Memorial Hospital. After graduating from Chickasha High School, Vicki attended Cameron University, and studied nursing. She had a passion in caring for those ill and was given the opportunity to work as a nurse staffer, a nurse in the Baptist Burn Center, and Hillcrest Hospital, which is where she met her loving husband, Ed. She and Ed were married December 7, 1979, and that matrimony lasted 41 years. Side by side, Ed and Vicki owned and operated Stewart Medical Clinic in Newcastle. As a young adult, Vicki inherited a love for politics. She was the first female that served on the Newcastle City Council. After moving to Chickasha in the late 1980s, Vicki also dabbed in real estate, bred barrel horses, and owned/trained racehorses. In 1996, alongside her family, she co-founded and owned LifeLine Home Health & Hospice. She served as CFO and Vice-President. While working with hospice patients, Vicki really began reflecting on and sharing her love for Christ. She frequently discussed her no fear of death, because of her love and faith of Jesus. Vicki loved and gave aggressively. She was generous and showed her kids how to give through acts of love and kindness. If she had it to give, she gave it, and taught her kids good deeds don’t need to be recognized. She loved Christmas time; its meaning, the celebration, the sharing and giving. Her family was the center of her universe, and she was a loving and supportive mother. The term “momma bear” doesn’t even begin to describe. When her grandchildren were born, she found an even greater joy in being grandma. Vicki lived several homes down from two of her grandchildren up to her passing, and she loved the slumber parties and all the girl-fun activities a grandma could provide. She often joined them at horse riding lessons, and the girls had recently convinced her to start riding as well. If you really knew Vicki, you knew she could not be described in one word. She was fun, sassy, classy, and spicy. Her presence lit up a room. If she was going to do it, she was going to do it big. If it was on her mind, she was saying it. If it was funny, she belted laughs. If it was sad, her sobs were enormous and heart-felt. Vicki loved to have fun, and she always made sure her company was having a good time too. She was not the life of the party; she was the party. She could create fun at any moment and bring color to any event. She always said, “You can never be over-dressed.” Her scrubs were always heavy-starched, and gold bangles always adorned her arm. She loved her bangles – the more the merrier. They say diamonds are a girl’s best friend, and they were one of hers too. Vicki loved perfumes, and she left her scent in every room she entered and left. Her lipstick was always applied, and re-applied, as often as required to keep her fresh. In fact, she would often remind her daughter to “put her lips on” as well. Her nails were always long and manicured with the sassiest colors of the season. When it came to shoes, the higher the heel, the better; and when it came to handbags, she needed one to match every outfit. Vicki is now rejoicing in heaven with her parents, Billy Jim and Joy Livingston. She leaves her daughter and son-in-law, Dr. Linzi Stewart-Crawford and husband, Sean Crawford, and their children, Marli LaRue and Vale Ru; son and daughter-in-law, Cole and Lindsy Stewart, and their children, Kaden Cole and Maci Rae; her ex-husband and life friend, Dr. Ed Stewart. She leaves her sister and brother-in-law, Toye and Tim Reynolds; nephew Billy Moon and spouse Amanda; niece April Downing and spouse Billy; and niece Kea Ginn and spouse Jeremy. She loved the Stewart side of her family, and always considered them as her own. She leaves behind many in-laws, nieces, nephews, and extended family. She is also survived by a very special friend, Holly Miller, who gifted Vicki with a kidney in 2010, so she could continue her life without confinements of dialysis. Holly was an angel and true blessing to Vicki, and our family will be forever grateful. Her celebration of life will take place at 10:30 a.m. on Friday, December 18, 2020, at the First Baptist Church in Chickasha, OK, with Bro. Greg Brooks officiating, and under the direction of Crawford Family Funeral Service, Edmond. The service can be steamed live at www.vimeo.com/fbcchickasha.

Vicki LaRue Stewart, 66, of Oklahoma City departed from this Earthly world to join her heavenly Father on December 9, 2020. Her transition from Earth was unexpected and has left a void in the hearts of those that loved her. Vicki was born December... View Obituary & Service Information

The family of Vicki LaRue Stewart created this Life Tributes page to make it easy to share your memories.

Vicki LaRue Stewart, 66, of Oklahoma City departed from this...