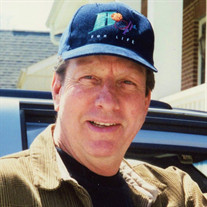 Veldon L. Morrow graduated this life on July 9, 2019. New adventures lie before him in God’s glorious universe. He was born in Muse, Oklahoma on September 1, 1937. He was the seventh of ten children of Coy Leslie and Bessie Black Morrow. He grew up in Wardville, Oklahoma and graduated from High School in Denton, Texas. After that he lived in Oklahoma City and Edmond, Oklahoma. He was preceded in death by sisters Auburn (Dusty) Goble, Lacey Helen Thompson, Claudia (Todd) Barthel, and Alma (Tracy) Morrow and brothers Delwood Morrow and G. Leslie (Tuffy) Morrow. He is survived by sisters Clara Bishop, Virginia (Ginny) Dingler, Phyllis Johnson and many nieces and nephews. On January 9, 1960 he married Charlene Butler. Shortly after their marriage Veldon was drafted into the Army. They lived for two years in El Paso, Texas. He is survived by daughters: Julia (Julie) Sykes and son-in-law Sven Sykes and Vicky Wedel and son-in-law Todd Wedel. He has been blessed with a grandson Steven Sykes and granddaughters Jessica (Jessie) Sykes and Kristen (Kiki) Sykes, Hannah Wedel and Emalee Wedel. He was a skilled automobile mechanic. He worked with his wife in their Interior Design business installing draperies. He loved fishing with his brother Les, nephew Ivan, friend Joe and his friend as a youngster Danny. He got great enjoyment from playing his guitar. He was a friend to all people. He loved bird watching – feeding them, providing houses for them and just enjoying their presence. He liked very much to grow flowers, trees and vegetable gardens. His friends called him a flowerologist. In 1963 Veldon joined the Urantia Book Society of Oklahoma, staying involved and hosting meetings in their home. A Memorial will be held at Crawford Family Funeral Service, 610 NW 178th St., Edmond, OK 73012, with a reception to follow, on Saturday, July 27, 2019, at 2:00PM. In Lieu of flowers, donations can be made to an organization of your choice.

Veldon L. Morrow graduated this life on July 9, 2019. New adventures lie before him in God&#8217;s glorious universe. He was born in Muse, Oklahoma on September 1, 1937. He was the seventh of ten children of Coy Leslie and Bessie Black Morrow.... View Obituary & Service Information

The family of Veldon L. Morrow created this Life Tributes page to make it easy to share your memories.

Send flowers to the Morrow family.