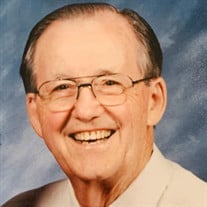 Reverend Vaughn Clinton “Clint” Purtell, beloved husband, father, grandfather, brother, uncle, longtime servant leader and United Methodist passed away peacefully in his Oklahoma City home on Monday November 30th, 2020. Clint was born November 1, 1924 in Durant Oklahoma, the fourth of nine children to Clyde and Veva (Mattingly) Purtell. Clint wrote in one of his journals “We grew up moving every 1-2 years because our dad was a Frisco Railroad agent and telegrapher, so our family was familiar with and attached to that railroad company.” Clint’s sisters tell stories of Clint a young teenager patterning himself after the character Magua from the 1926 book the “Last of the Mohicans”, and his unquenched desire to hunt and fish. Clint attended Leflore Public School, graduating in May of 1943. Clint joined the Navy in June of 1943, served during World War II and was honorably discharged in 1946. Clint subsequently attended Oklahoma City University and graduated from Southern Methodist University in Dallas in 1953, and was ordained elder in full connection in the United Methodist Church. Clint pastored numerous churches throughout Oklahoma, serving God’s people for over 70 years. He had the honor of officiating a number of his family members’ weddings, including his first marriage to his sister Jean and her husband Don, his son Clinton Tyler and his wife Amber in 1998, and his niece Anna and her husband Ben in 2015. Vaughn was also instrumental in establishing the First United Methodist Church in Madill, Oklahoma and served on a number of boards, including the Boys Ranch in Gore, Oklahoma. He was a Chaplain in the Civil Air Patrol and was a private pilot, and flew numerous search and rescue missions for the United States Air Force Auxiliary. Clint married his soulmate Rev. Marsha (Regan) in 1980 and they enjoyed 40 years together, serving others, growing churches, traveling on missions through central America and into Israel. Clint is survived by his sons, Clinton Tyler Purtell, Keith Purtell, Jeff Purtell, and daughter Claire Purtell, Daughter in Law Amber Leigh Grider Purtell, and grandchildren, Brooklyn Page Purtell, Jacquelyn Nicole Purtell, and Clinton (Chip) Harrison Purtell; He is also survived by his sisters, Lula Marguerite Rutledge, Edith Jean Carpenter and Wanda Carol Wendruck and brother Paul Wayne Purtell. He is proceeded in death by his beloved wife: Rev. Marsha Nan Regan Purtell, his parents, Clyde and Veva Purtell, brothers: Clyde Jr. Purtell, Vance Rudolph Purtell, and sisters Geraldine Moore and Betty Ann Ussrey. Services will be held on December 14, 2020 at Crawford Funeral Services in Edmond, OK, starting with a memorial service at 10am and a military graveside service at Ft Sill National Cemetery at 2pm. In memory of Clint and Marsha’s passion for serving the under-privileged and support our nation’s military, a Purtell Family Endowed Memorial Scholarship is being established. The scholarship will support first-generation, low income students and dependents of deceased military veterans. In lieu of flowers the family request donations to the Purtell Family Scholarship Fund at Oklahoma City University. Online gifts can be made at https://www.okcu.edu/onlinegiving/development/give?BBFund=1599 or by sending a check to OCU Office of Advancement, PO Box 2780, Oklahoma City, OK 73101. All donations are tax deductible.

The family of Rev. Vaughn Clinton Purtell created this Life Tributes page to make it easy to share your memories.

Send flowers to the Purtell family.