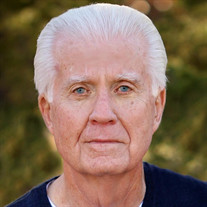 Van Edward Courson, Jr., 78, of Edmond, OK joined his savior, Jesus Christ on July 2, 2020 at 5:22 a.m. He lived a life of service to God and to men, and we know as he entered the gates of heaven that God the Father said, “Well done, my fine and faithful servant.” Van was born to Van and Dorothy Courson on July 31, 1941, in Monroe, Louisiana. His family moved to Jackson, Mississippi, where he spent his early childhood. He attended Lake Elementary School, Hardy Jr. High, and Murrah High School. This is where he met and married the love of his life, Barbara. They were married May 27, 1960 and were married for sixty years. Their daughter, Elizabeth, was born in 1961. While attending college, he played football at Hinds Jr. College and Mississippi College, where he graduated in 1964 with a BS in Education. His lifelong desire was to coach and teach school. After graduation, he took an assistant football coaching position at Peeple’s Junior High School in Jackson, Mississippi. The next year he became the head football coach and history teacher at Lawhon Junior High in Tupelo, Mississippi, and an assistant for Tupelo High School football. In 1965, their second daughter, Patricia, was born. While in Tupelo, he also coached track and field, and he restarted the girls’ basketball program. Van organized the Little Lee Football Conference and coaching clinics for coaches around the northeast Mississippi area. He worked to build a sense of pride in his players and students. He instilled in them a desire to be the best they could be. You could hear the students and players screaming, “We’re from Lawhon and we couldn't be prouder. If you can’t hear us, we’ll yell a little louder!” He was so proud of “his kids.” In 1970, he decided to make a career change and joined Cities Service Oil Company in Bartlesville, Oklahoma, as a landman. After one year, the company moved to Tulsa, Oklahoma. While working in Tulsa, he was very active in the youth football program. He coached the Foster Junior High football and basketball teams for three years and once again, developed a sense of pride and self-worth, and built a successful program. In 1973, Cities Service moved the family to Jackson, Mississippi, where they lived in the suburb of Clinton. Again, Van became very involved in the community and school district as he served as the president of the Clinton Arrow Booster Club. During this time, Van accepted a job with Florida Gas Exploration. In 1979, with Elizabeth now a college student, Van, Barbara and Patricia moved to Dallas with Sun Oil Company, and in 1980, they moved to Tulsa, Oklahoma, with Dalco Petroleum.In 1981 Van and a partner started their own oil company, Petroleum Resources, and the family returned to Clinton. With the decline in the oil business, he accepted a position as Vice-President of Land with Texas International in Oklahoma City, Oklahoma. Unfortunately, the oil business didn’t rebound quickly, and there was a period of three years of a layoff. In 1988, Van joined Questar Exploration as the head of their land division in the Oklahoma office. He remained here until his retirement in 2007. In the spring of 1985, Van fell in love with Jesus Christ and completely turned his life over to him. From 1985 until he entered heaven, he shared this love for Christ with everyone he met. During the 1990’s, Van volunteered with Promise Keepers to organize three conferences in Oklahoma City. Developing men of integrity who desired to love and lead their families while serving God was his passion. He established the ministry God, Men and Life and invited every man he met to join this group to learn and worship Jesus. Van believed that “As iron sharpens iron, so one man sharpens one another” (Proverbs 17:17), and that a man should be a man of integrity. Van loved his family with passion and spent many hours watching his grandchildren’s sporting events, plays, and school activities. Van was preceded in death by his parents, Dorothy Morrow and Van Courson, Sr., and his sister Jayne Rainer. Van is survived by his wife, Barbara; daughters Elizabeth Clower of Laramie, Wyoming, and Patricia Schoepflin and her husband Scott of Edmond, Oklahoma. Also, there are three; beloved grandchildren, Dean Clower, Jr. and wife, Amanda of Laramie, Wyoming; Lorin Schoepflin and fiance’ Christopher Holland of Edmond, Oklahoma; Shali Stewart and husband Jimmy of Edmond, Oklahoma. In addition, he is survived by four great-grandchildren, Riley and Westyn Clower and Samantha and Bentley Schoepflin. He is survived by other loving relatives, sister Sue Courson Durrett of Alabaster, Alabama, and brother Johnny Courson and wife Sue of Clinton, Mississippi; nephews Van Durrett and wife Pam of Concord, North Carolina, Bruce Durrett and wife Tracy of Alabaster, Alabama, and Robert Nance of Tulsa, Oklahoma; and nieces Allyson Courson of Clinton, Mississippi and Jessyca Garrard of Clinton, Mississippi; and other loving relatives. A come-and-go life celebration/reception will be held Friday, July 10, 2020 from 5:00PM-8:00PM at Crawford Family Funeral Service in Edmond, OK to remember and celebrate Van's life.

The family of Van Courson Jr. created this Life Tributes page to make it easy to share your memories.

Send flowers to the Courson family.