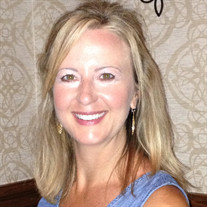 Tracey Elaine Ossenkop, 47, passed away October 30 following a courageous struggle with cancer. Tracey was born to Larry and Josie Harris on October 24, 1971 in Midwest City, OK. Upon graduation from Putnam City West, she attended Southern Nazarene University and received her BS in Nursing in 1993. Following in her mother’s footsteps she immediately began her nursing career at Deaconess Hospital in the NICU, and later received her IBCLC certification, working as a childbirth and prenatal educator and lactation consultant. Her nursing career also included travel to New Orleans, working in the NICU at Tulane University Hospital, and the Oklahoma Spine Hospital, where she made special friendships. At age 27, she was introduced to Todd through a mutual friend. Their friendship and love grew, and they were married on July 28, 2001. Prayers were answered on February 22, 2004 when she gave birth to three beautiful daughters, Josie, Ashley and Evie. She was generous, kindhearted, and had an infectious smile. Tracey was a wonderful wife, exceptional mother, and cherished friend. She would talk to friends and family for hours always listening, supporting, and encouraging them. Tracey and Todd attended Crossings Community Church in Oklahoma City where she enjoyed volunteering for Crossings Kids. She had a passion for children and was a mother to all. Car rides full of the girls and their friends was an everyday occurrence. Tracey enjoyed traveling, including fun-loving getaway girlfriend trips as well as wonderful family vacations. However, she relished the moments when she and Todd were able to get away and spend time together. Her strong faith in the Lord gives us great comfort. Tracey was preceded in death by her mother, Josie Harris, and grandfathers, Kenneth Harris and Kenneth Walden. She is survived by her husband Todd of 17 years and their daughters Josie, Ashley and Evie; her father Larry Harris and wife Judy; brother, Brent Harris, his wife Brittany and their children; stepsisters, Emily Acton and Erica Blystone; grandmothers, Elsie Smith and Martha Duke; mother-in-law Teresa Ossenkop, father-in-law Mike Ossenkop and wife Debbie; brother-in-law Brian Ossenkop, as well as six nephews, one niece, and a host of other family members. The family would like to thank the members of the Mercy Hospice for their kind and loving support and care for Tracey, Todd, and the family. A Come-and-Go visitation for Tracey will be held on Monday, November 5, 2018 from 12-8 p.m. with the family to receive friends from 5-7 p.m. at a reception at Crawford Funeral Service Chapel, 610 NW 178th, Edmond, OK. Services celebrating the life of Tracey will be held on Tuesday, November 6, 2018 at 10 a.m. at Crossings Community Church Chapel, 14600 Portland Ave, Oklahoma City, OK 73134. A GoFundMe account has been established by Todd’s coworkers for the family at https://www.gofundme.com/tracey-ossenkop.

The family of Tracey Ossenkop created this Life Tributes page to make it easy to share your memories.

Send flowers to the Ossenkop family.