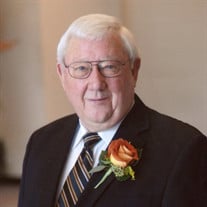 The service honoring Tommy can be streamed at www.ServantOKC.org/watch Thomas Earl Team was born February 20, 1937 in Oklahoma City, Oklahoma to Jim and Catherine Team. Surrounded by loving family, praise and worship filled the home as Tommy entered the heavenly gates. He was welcomed into his eternal home by his savior and a host of relatives and friends. Tommy graduated from Putnam City High School in 1956 and went on to serve with distinction in the United States Marine Corps. He returned home to help run the family business, Team Air Conditioning until his semi-retirement in 2002. Tommy was a founding member of over 50 years in the Oklahoma City Business Boosters Club and was a National Association of Homebuilders lifetime Spike member. He also served many years in the Oklahoma City Homebuilders Association and Heat Pump Association. Wanting to remain active after retirement, Tommy revived the family sheet metal business, General Metals. His custom designs were in high demand throughout Oklahoma for almost 20 years. Tommy married Mary Ann Biles on June 3, 1958. They were married for 46 years until her passing in 2004. Tommy and Mary Ann devoted their lives to loving and raising two beautiful children, Gayle G. Smith and Suzette F. Johnson. They delighted watching their girls marry the loves of their lives, L. Myles Smith and Chris D. Johnson. They also loved doting on their four grandchildren: Tifani D. Conway, Adam M. Smith, Abby F. Johnson and Anna H. Johnson. Tommy attended Church of the Servant in Oklahoma City where he reconnected with longtime friend, Rita Pangborn. Tommy and Rita shared many common interests and began dating through their Sunday School class. They were married November 15, 2008. Tommy and Rita loved to travel and were able to take many bucket list trips seeing the world together. Israel, Panama Canal, Hawaii, Alaska, and Arizona just to name a few. They enjoyed traveling for many years in their RV, going coast to coast with their RV group, “The Happy OK Wanderers” where they served as Presidents in 2017. When not traveling Tommy and Rita called Oklahoma City home base and spent many years enjoying life with friends, family and especially great grandchildren. Tommy’s family legacy includes his loving wife, Rita, 2 daughters and their spouses Gayle Smith and the late L. Myles Smith, Suzette and Chris Johnson. 6 grandchildren; Tifani and Brian Conway, Adam and Cassidy Smith, Abby and Anna Johnson and 5 great grandchildren, Reid and Julia Conway, Savannah, Sutton and Sheridan Smith. He is also survived by his sister, Joanna Ryan, aunt, Jerry Anderson, and many cousins, nieces and nephews. He is preceded in death by his parents, Jim and Catherine Team and his brother, Wayne Team. The family would like to thank his wonderful care givers from Laura Lynn and Integris Hospice that lovingly cared for him during his struggle with dementia. Tommy lived his faith in Jesus in the most practical ways with his family and friends, in business, mentorship, clubs and church. Tommy’s impact will continue to be felt for generations. A come and go visitation will be held Sunday, May 16th, 1-6 p.m., with family with family there to greet from 1-3 p.m. at Crawford Family Funeral Service in Edmond, OK. A life celebration will be held Monday, May 17th, 2 p.m. at Church of the Servant in Oklahoma City. Memorial donations can be made in his name to Alzheimer’s Association – www.alz.org or Oklahoma Christian School Building Fund – www.ocssaints.org/support-ocs-new Services will be made available via livestream through his tribute page on the Crawford Family Funeral Services website.

The service honoring Tommy can be streamed at www.ServantOKC.org/watch Thomas Earl Team was born February 20, 1937 in Oklahoma City, Oklahoma to Jim and Catherine Team. Surrounded by loving family, praise and worship filled the home as Tommy... View Obituary & Service Information

The family of Tommy Team created this Life Tributes page to make it easy to share your memories.

The service honoring Tommy can be streamed at www.ServantOKC.org/watch

Send flowers to the Team family.