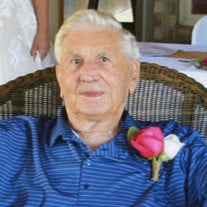 Thomas Gilbert Craven finished the race and went home to be with his Lord on June 7, 2021, at the age of eighty-seven years old. Tom was born on June 14, 1933, in Oklahoma City, Oklahoma, to Raymond and Pearl Craven. He had one older brother, Robert Eugene Craven, and they spent most of their time in OKC. They moved to Mt. Pleasant, Michigan, when Tom was in high school. Tom joined the Air Force at the age of eighteen while in Michigan. The next four years he traveled all over the world while enlisted in the Air Force. He spent eighteen months in Guam, three months in North Africa, one and one half months in Japan, one and one half months in Germany. He came back to the US and was stationed at Stead Air Force Base in Reno, Nevada, for twenty-four months where he finished out his time in the Air Force. While in Reno, he met his beautiful wife to be, Norma, on a blind date. They dated about three to four months and then wrote love letters for the next year while Tom worked in California, Tom married the love of his life, Norma Treice Bridgman, at the age of twenty-four on June 2, 1957, in Reno, Nevada. They spent fifty-five years happily married. Tom and Norma moved their family to Edmond, Oklahoma, in 1967, to raise their children. He spent thirty plus years as an Allstate agent in Edmond, Oklahoma. In 2002, Tom retired from Allstate and became known as 'Tinkering Tom' as he loved to work with Norma on her DIY list. He enjoyed doing yard work, tending to his garden, flower beds, relaxing by his pool, and most of all spending time with his family! Tom's love for his family was very evident as he loved and adored his three children, six grandchildren, and two great-grand-children. He especially enjoyed his two long-haired dachshunds, Jingle and Bell, and his Shih-poo, Bailey Mae! He is preceded in death by his loving parents, his wife, and his brother. Tom is survived by his three children and their spouses. His son, Drs. Tom and Perri Craven of Sand Springs, Oklahoma, and daughters Sandy and Mike Cook of Edmond, Oklahoma, and Jennifer and Aaron London of Arcadia, Oklahoma, as well as his beloved grand-kids: Conley and Evan Stahl, Tulsa, Oklahoma; Cody and Dani Cook, Edmond, Oklahoma; Bridge Craven, Austin, Texas; Anna London, Orlando, Florida; Taylor and Jacob Tunney, Edmond, Oklahoma; and Drew London, Arcadia, Oklahoma, and 2 beautiful great-grandchildren, Perrin Stahl and Karsten Cook. In lieu of flowers, donations can be made to a charity of your choice. A funeral service to remember and celebrate Tom's life will be held Wednesday, June 9, 2021 at 2:30PM at Crawford Family Funeral Service in Edmond, OK. Visitation with the family and those wishing to pay their final respects to Tom, will be held one hour prior to services beginning on Wednesday. Entombment will take place following services at the Memorial Park Cemetery Mausoleum in Oklahoma City, OK. Services will be made available via livestream, just prior to services beginning, here on Tom's tribute page.

Thomas Gilbert Craven finished the race and went home to be with his Lord on June 7, 2021, at the age of eighty-seven years old. Tom was born on June 14, 1933, in Oklahoma City, Oklahoma, to Raymond and Pearl Craven. He had one older brother,... View Obituary & Service Information

The family of Thomas Gilbert Craven created this Life Tributes page to make it easy to share your memories.

Thomas Gilbert Craven finished the race and went home to be with...

Send flowers to the Craven family.