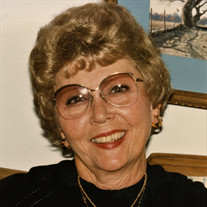 Thelma Lee Biby Crum, age 94, died February 27,2019, in Oklahoma City. Thelma Lee was born at home in Nash, Oklahoma to Eva and Chester Biby on March 14, 1924. She was the oldest of two children and attended Gore Consolidated Number 1 School. She met Arden Robert Crum while he was visiting his uncle’s farm in northern Oklahoma near her home. They were married on July 8, 1942 at the Pond Creek Baptist Church after Thelma Lee was graduated from high school. On February 15, 2018, Thelma Lee and Arden were recognized as Oklahoma’s longest married couple after 75 years of marriage. They enjoyed ballroom dancing, travel and playing games like bridge and canasta together. While her husband served in the Army Air Corp from February 9, 1943 to November 9, 1945, Thelma Lee worked as a price clerk in Grant County. Arden was a radio operator using Morse code in Naples and Corsica, Italy. He wrote a letter to Thelma Lee every day and she had two file drawers full of letters. Their daughter, Ardeta “Dee” Lee Crum was born June 12, 1943. Thelma Lee enjoyed volunteering whenever she was asked. After serving in the military, Arden worked for the Oklahoma Publishing Company from 1945 until 1980. They moved to Guthrie to be near their daughter, Dee, and grandson, Proctor Land. After retirement, they traveled all over the country in their motor home, spending winters in La Penita, Mexico and a summer in Alaska. They were active members of the First Southern Baptist Church in Guthrie for 22 years and the Encouragers Class, staying in touch with their friends after they moved to Epworth Villa in 2017. Thelma Lee was pre-deceased by her husband of 75 years, Arden Robert Crum, her parents, brother Leonard Dean Biby, and daughter Ardeta “Dee” Lee Crum Land. She is survived by her grandson Henry Proctor Land III, who played football at the University of Oklahoma for Coach Barry Switzer. They hardly missed an OU football game when Proctor was in college. She is also survived by many nieces, nephews and special friends including Debbie Fullbright. Services will be held Saturday, March 9, 2019, at 3:00pm at Crawford Family Funeral Service in Edmond, OK. Her family requests that in lieu of flowers, donations be sent your favorite charity.

The family of Thelma Lee Crum created this Life Tributes page to make it easy to share your memories.

Send flowers to the Crum family.