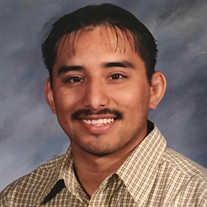 God, family, wrestling and the University of Oklahoma were a few things that Steven loved the most. He loved God with all of his heart and gave his life to Him in July of 1998. He was a strong Christian man who would love to share his testimony with anyone and everyone who would listen to him. Next to God, Steven loved and adored his family more than anything in this world, especially his 3 children, Bianca, Alex and Brittany. He would do anything and everything for them. He was so proud of the people that they had become to be and would brag about his kids to all of his friends! He was proud to call them his kids. Steven did his best to make all of the soccer games, wrestling tournaments and cheer events he could, and routed them on when he wasn’t able to attend. Steven would light up the room anywhere he went, and he had a distinct voice that would carry through crowds of people. Steven was one of a kind, and his smile is something we will never forget. Steven Frank Cardenas was born on November 24, 1977 in Clinton, OK to Alfredo Cardenas Jr. and Francis (Martinez) Amaro. He passed away in Oklahoma City, OK on August 18, 2020 at the age of 42. Steven was the middle brother to Freddie, Danny, Eddy Ray and Ricky. He grew up in Clinton, where he was first introduced to wrestling by his uncle Pete. This is where he found his first love. Steven excelled in wrestling, winning a state championship his 7th grade year and 9th grade in Jr. High State, as well as his freshman year and senior year of high school. He was selected as an All-State wrestler as well as an invitation to Senior National Wrestling Tournament in Pennsylvania. Steven was a dominant wrestler and people all over the state had heard of a skinny kid out of Clinton that would tear everyone up on the mat! During his middle school years, he met the love of his life, Leticia Fernandez, and dated throughout their school years. He and Leticia married in April of 1996, right before graduating high school. Steven was such a great wrestler, that he was offered a scholarship to wrestle for Coach Spates and Coach Mark Manning at the University of Oklahoma. He spent a brief time at OU, only wrestling for a year, before coming back home to Clinton after he found out he was going to be a father to Bianca Jaree 1996. Steven loved his family dearly and always put them first. He gave up his dream of becoming a NCAA D1 National Champion (Multiple times of course), and later Olympic wrestler, to be with his family and be a father. Steven continued his education at Southwestern Oklahoma State University, where he received his bachelor’s degree in Education in 2001. While he was working on his degree, Steven started to coach wrestling in Clinton Public Schools, starting with the Pee-Wee program and helping with the Jr. High and High School programs. During this time, Steven and Lety were blessed with 2 other children, Steven Alexander born in 1998 and Brittany Gizelle born in 2001, both whom he adored greatly. Steven spent 3 years coaching in Clinton and in 2006, took the Jr. High head coaching job in wrestling in Piedmont, OK. He coached in Piedmont for 3 years. After coaching, Steven went on to pursue a few occupations, including roofing, construction and most recently, home remodels with his son, Alex. He enjoyed watching wrestling, whether it were his friends kids at pee-wee tournaments or the NCAA National Tournament, Steven lived for the competition. Steven was able to attend 2 National Tournaments in Oklahoma City and St. Louis where he cheered on his OU Sooner wrestlers and loved every minute of it! Steven is preceded in death by his grandparents, Rosie and Juan Vasquez as well as numerous aunts and uncles. He is survived by his wife, Leticia Cardenas; children, Bianca, Alex and Brittany Cardenas; father Alfredo Cardenas Jr. and significant other Lisa; mother, Francis Amaro; brothers; Alfredo Cardenas, III and wife Lena, Daniel Adam Cardenas and fiancé Heidi Johnson, Eddy Ray Cardenas and wife Ashley and Ricardo Cornelius Cardenas; sister, Monica Star Cardenas, as well as numerous aunts, uncles, nieces, nephews and friends. Come-and-go visitation for Steven will be held at the Crawford Family Funeral Service, 610 NW 178th St. Edmond, OK 73012, on Friday, August 21, 2020 from 3 p.m. until 8 p.m. and Saturday, August 22 from 9 a.m. until 8 p.m. The family will be receiving friends at a reception from 5 to 7 p.m. at the funeral home, where friends will be encouraged to share stories. Come-and-go visitation will be held on Sunday, August 23, 2020 from 1 p.m. until 8 p.m. with the family to greet friends from 5 to 7 p.m. at the Kiesau-Lee Funeral Home, 2500 W. Modelle Ave. Clinton, OK 73601 and friends will be encouraged to share stories. Funeral services will be held on Monday, August 24, 2020 at 2 p.m. at the Custer Avenue Church of Church with Pat Peters officiating and burial to proceed to the Clinton Cemetery. In lieu of flowers, the family request memorial donations be made to the family for funeral expenses, or by donating to the https://www.gofundme.com/f/tfess-the-cardenas-family. Mask and social distancing are encouraged for all events please.

God, family, wrestling and the University of Oklahoma were a few things that Steven loved the most. He loved God with all of his heart and gave his life to Him in July of 1998. He was a strong Christian man who would love to share his testimony... View Obituary & Service Information

The family of Steven Cardenas created this Life Tributes page to make it easy to share your memories.

God, family, wrestling and the University of Oklahoma were a...

Send flowers to the Cardenas family.