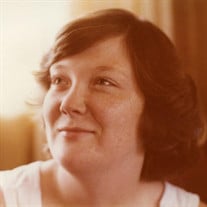 On Wednesday, February 6, 2019 the world lost Sherie Lynn Hodges, 61, of Oklahoma City, OK. She was a loving and caring mother and wife. She was born in Oklahoma City, OK on December 7, 1957 to Letha Mae Meyer and Edward Dale Meyer. She lived her entire life in Oklahoma City. Sherie was an avid Girl Scout, loved bowling, singing in the church choir and loved spending time with friends at the Bethany Church of Christ and at Putnam City West High School. Sherie and her soon-to-be husband, Michael, met on a blind date at a friend’s house in September 1976. Within a few months, Michael modestly asked for Sherie’s hand in marriage and before the calendar could turn over to 1977, they were married. Over 42 years of marriage, their love for each other only grew and strengthened. Sherie devoted many years of her life to raising her simultaneously hellacious, sweet and smart children: Allison, Brandon and Brian. Allison was born July 8, 1981. Sherie’s resolve in her first foray into parenthood was tested by Allison spending her first 60 days in the NICU. Surely Sherie and Allison’s beautiful friendship grew out of that trying time. Brandon was born April 22, 1985. Sherie’s next test was Brandon’s indelible stubbornness and rambunctiousness. In spite of that, she could not be more proud of Brandon’s service in the United States Air Force. Brian was born June 11, 1987. Brian’s creativity and traveling nature led to a lack of phone calls home to Sherie. Brian, the baby, was still rumored to be the favorite. When she wasn’t spending time with her family, Sherie loved getting together for meals with her best friends Teresa, Tamar, Valerie and Deona. Between allergies, migraines and other health issues, there’s always been something for Sherie to overcome. In her later years, she fought off numerous maladies with the loving support of her husband, Michael. Sherie’s life, while filled with many hardships was also filled with many blessings. Sherie is survived by her husband, Michael Hodges of Oklahoma City, OK; brother, Terry Meyer of El Reno, OK; daughter, Allison Hodges of Las Vegas, NV; son, Brandon Hodges, wife, Ashley Hodges and their son, Raylan Hodges of Navarre, FL; son, Brian Hodges of Nashville, TN. A memorial service will be held at 1:30 pm Monday, February 11, at Bethany Church of Christ in Bethany, OK.

On Wednesday, February 6, 2019 the world lost Sherie Lynn Hodges, 61, of Oklahoma City, OK. She was a loving and caring mother and wife. She was born in Oklahoma City, OK on December 7, 1957 to Letha Mae Meyer and Edward Dale Meyer. She lived... View Obituary & Service Information

The family of Sherie Lynn Hodges created this Life Tributes page to make it easy to share your memories.

Send flowers to the Hodges family.