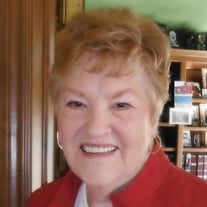 Selma Shelli Mitchell, of Edmond, Oklahoma, went to her heavenly home on Monday, March 14, 2022 at the age of 82. Shelli’s passing was unexpected, and occurred after a short battle with a devastating illness. Her family was with her when she passed, and her passing was peaceful. Shelli was born on July 1, 1939, in Abbott, Arkansas to the late Recie and Pearl Mitchell. She grew up in the post-depression era, and experienced many of the difficulties of persons growing up during that time. Her mother was ill for most of Shelli’s youth, and therefore she was responsible for the household duties. She married Dwaine Jones at the young age of 17, and had her first daughter at the age of 18, with 3 more to follow in the next 6 years. Her life was consumed with raising her 4 daughters in her early adult life. She loved her girls tremendously, and they were the joy of her life. When her children were in their teens, she began to attend college classes at the former Central State University, now University of Central Oklahoma. She earned a Bachelor’s of Science, majoring in Fashion Merchandising in 1981, and a Master’s of Education, majoring in Adult Education in 1985. She worked for several years at the OU Health Sciences Center Oklahoma Medical Research Foundation as a research coordinator. She also worked as a petitioner after leaving OMRF, and was therefore able to visit every state in the country. She very much enjoyed her work, and met many people who became life-long friends. Shelli grew up as many women did during the post-depression era sewing their own clothing, linens, and such. She grew to love sewing, and became a talented seamstress and quilt maker. She made many beautiful things, such as a suit for her late husband, wedding and bridesmaids’ dresses, many items of clothing, Raggedy Ann and Andy dolls, doll clothing, curtains, table runners, candle rings, soup bowl ‘potholders,’ pin cushions, etc. You name it, she made it, and she often created her own patterns. She made many quilts for her family, and over the years her quilt making evolved into quilted wall hangings -- art pieces that she often designed. She was a master seamstress and quilter, which won her admiration from family and friends, as well as ribbons from the Oklahoma State Fair for pieces that she often submitted. Shelli lived in the Oklahoma City area for most of her adult life, and in Edmond particularly for 50 years. She attended Henderson Hills Baptists Church for many years. She loved the Lord, read her Bible and devotionals daily, and often watched church services, sermons and Christian programs on television on a daily basis, which she preferred to ‘mainstream’ television. Shelli was hardworking, talented, creative, strong, loving, and caring. Her many friends and family are blessed to have known her, and she will be greatly missed. Shelli is survived by her daughters ReJina Janes, Rhonda Wyatt and Renee Wheeler; her grandchildren Birch Warner, Allison Oberg, Austin Mullis, and Brooke Spears; her great grandchildren Bowen Oberg, Kendrick Pierce, River Mullis, Claire Warner, and Eliana Fritz. She is preceded in death by her parents; her siblings Dorothy Smith, Evelyn McAlister, George Taylor, and Jerry Mitchell; her ex-husband Dwaine Jones; her daughter Alisa Jones; and her granddaughter Katie Warner. Shelli lived a long and fulfilled life, and survived many illnesses and difficulties. Her Heavenly Father welcomed her home in His perfect timing, so that she would no longer suffer. Her family knows that she is now restored to her youthful self, and at peace, and for that they are comforted. Funeral services will be held on Saturday, April 2 at 2:00 pm in the chapel at Crawford Funeral Service in Edmond, OK. A Henderson Hills Baptist Church pastor will officiate the service. The service will be streamed via the Crawford Funeral Service website for those wishing to attend the service virtually.

Selma Shelli Mitchell, of Edmond, Oklahoma, went to her heavenly home on Monday, March 14, 2022 at the age of 82. Shelli&#8217;s passing was unexpected, and occurred after a short battle with a devastating illness. Her family was with her when... View Obituary & Service Information

The family of Shelli Mitchell created this Life Tributes page to make it easy to share your memories.

Selma Shelli Mitchell, of Edmond, Oklahoma, went to her heavenly...

Send flowers to the Mitchell family.