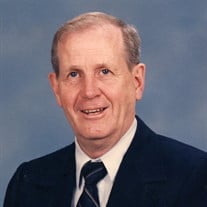 Seth Wroten Johnson, Jr., was born on April 21, 1934, on a farm near Elk City, Oklahoma. He was the youngest of five children, born to Seth Wroten Johnson, Sr. & Flossie Brook Wells Johnson. His mother was a school teacher and his father was a farmer and combat veteran of World War I. He was very intelligent and liked by everyone who met him. A graduate of Merritt High School, he served in the Air Force for four years and graduated with a Bachelor of Science from Southwestern State College School of Pharmacy where he was a member of Kappa Psi Pharmaceutical Fraternity. Later in life he passed his CPA test on the first try and got his Insurance License just because he liked to learn and found it interesting. Seth met and fell in love with Ruth Johnson while working as a pharmacist at Gilbert-Woods Drug Store in Lawton, OK. They were married in 1965 and Seth was an instant father with three kids. Much later, they would have another child together, Jennifer. Seth and Ruth were married for 56 years. Seth worked as a pharmacist for over 50 years with several employers as he did not want to retire…ever. He enjoyed being a pharmacist and made many friends over the years in that capacity. He retired from Fort Sill after 16 years as a pharmacist, then continued working as a pharmacist at Wal-Mart. At one time, he opened his own pharmacy. He did not go anywhere without being recognized by former customers and he enjoyed visiting with every one of them! A life-long Baptist, Seth accepted Christ and was baptized at Trinity Baptist Church in Lawton, Oklahoma on July 5, 1964. He is survived by his children Ricky Thur (Lindy Thur), Cindy Shaw (Dr. James Shaw, MD) and Deana Howard (Don Howard); sister and brother-in-law, Glenna and Rod Pickett; grandchildren, Megan Thur, Rachel Bivans (Scot), Beth Richmond (Michael), Hannah Donwell (LaDarrius) and Jacob Howard; and great-grandchildren, Riley Bivans, Sage Bivans, Abby Richmond, Braden Richmond, Lexi Donwell and Tyson Donwell. Seth is survived by many nieces and nephews. He was predeceased by his wife, Ruth Johnson; daughter, Jennifer Johnson; parents, Seth Johnson, Sr. & Flossie Johnson; sisters, Floy Johnson, Beth Martin and brother-in-law Quinn Martin Sr., and Kathleen (Kay) and brother-in-law Thad McDonnell. A service honoring Seth’s life will be at 2pm on Tuesday, April 19th at Crawford Funeral Service, Edmond, OK. Burial will be at Fairlawn Cemetery in Elk City, OK.

Seth Wroten Johnson, Jr., was born on April 21, 1934, on a farm near Elk City, Oklahoma. He was the youngest of five children, born to Seth Wroten Johnson, Sr. & Flossie Brook Wells Johnson. His mother was a school teacher and his father... View Obituary & Service Information

The family of Seth Wroten Johnson Jr. created this Life Tributes page to make it easy to share your memories.