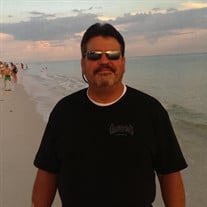 The brightness dimmed on November 4, 2021, when Scot Allan Zumwalt, 62, unexpectedly passed away at his home in Edmond, Oklahoma. He was born in Lawton, Oklahoma on September 6, 1959, to G.W. (Pete) and Lillie Mae (Cupp) Zumwalt. He attended and graduated from Lawton High School and Cameron University. The first time he met his future wife he told his parents that night that he had met the girl that he was going to marry and on May 12, 1978, he did in fact marry the love of his life Peggy (Martindale) Zumwalt and were married 43.5 years. They moved to the Oklahoma City/Edmond area in 1979 and he started his career in the Insurance Industry as a Multi-Line/Catastrophe Adjuster and was the youngest insurance adjuster in the State of Oklahoma at just nineteen years of age. He never met a stranger that he could not strike up and carry on a conversation with because he loved talking with people because everyone had a story. He was a workaholic who loved rebuilding cars, woodworking, working in the yard but also loved hunting and spending time with friends at the lake. Anyone that truly knew Scot knew he was kind, generous and had a big heart and would give you anything even if it wasn’t his to give and we take comfort in knowing he is at peace surrounded by a brighter light. He is survived by his soulmate, Peggy, his furr babies Owen and Cooper, brothers Mark, Tim and Johnny, sister Susie, and extended families. Preceding him in death were his parents, G.W and Lillie Mae Zumwalt, brother Terry, sisters Cathey, Sonja, his in-laws: John and Leora Martindale and brother-in-law John Martindale, Jr. “You never said I’m leaving, you never said goodbye. You were gone before we knew it, and only God knew why. A million times we needed you, a million times we cried. If love alone could have saved you, you never would have died. In life we loved you dearly, in death we love you still. In our hearts you hold a place that no one could ever fill. It broke our hearts to lose you, but you didn’t go alone. For part of us went with you, the day God took you home.” In memory of Scot memorial contributions can be made to the American Heart Association and to the Oklahoma Humane Society.

The brightness dimmed on November 4, 2021, when Scot Allan Zumwalt, 62, unexpectedly passed away at his home in Edmond, Oklahoma. He was born in Lawton, Oklahoma on September 6, 1959, to G.W. (Pete) and Lillie Mae (Cupp) Zumwalt. He attended... View Obituary & Service Information

The family of Scot Allan Zumwalt created this Life Tributes page to make it easy to share your memories.

The brightness dimmed on November 4, 2021, when Scot Allan Zumwalt,...

Send flowers to the Zumwalt family.