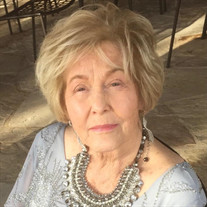 Sarah Jane Harper, known to many as Sally, passed away early Sunday 13 December 2020 at the age of 86 in Oklahoma City, Oklahoma. She was a devoted Christian and peacefully went to Heaven, joining her husband, son and many other beloved family members and friends. Sally is survived by her daughter Jennifer Garcia and husband Dee Ray, her daughter-in-law Tami Harper, her son Hal and his wife Kathleen, 5 grandchildren, one great grand-daughter, and her beloved dog Clarabell. There are also many others who considered her their mother and grandmother, as she was the last surviving child of her generation in the family. Born in Topeka, Kansas on 19 July 1934, she was the fourth and youngest child of Elwood and Margaret Lindemuth, and she was rumored by her siblings to act the part. Her older sister Virginia, being 10 years older, actually helped raise her, as it became clear early on that it had to be a family effort to help this one make it to through high school and into college. But make it, she did, going on to her beloved KU to get an Occupational Therapy degree with enough free time to be a Jayhawk cheerleader and a member of the Chi Omega sorority. The real big deal my mom would say about attending Kansas University turned out to be meeting her future husband, Harold Harper. In her own words, she was pursued by many; Harold was just more persistent and he turned out to be the love of her life. They had 35 years together and three children. Sally was a practicing Occupational Therapist early in their marriage until the children outnumbered the parents, and she made the decision to forego her career, focusing on the challenges of being a mother and wife. She was instrumental in making sure the family was active, seeking thrills in many outdoor activities. There was never a dull moment if Sally had anything to do with it. If that wasn’t enough, she somehow found time to become active in the GOP where she eventually became chairperson for the Edmond Republican Women. Through this stage of life with her children moving into adolescence, the tribulations that naturally follow led her to find true faith and begin to form a close, personal relationship with God. As that faith grew, she took the courageous effort to cultivate that same faith and relationship with God within her family; her mother, her father, her husband and her children. Not all of them went along with that plan initially, but in the end, they all found faith in their own way and at their own pace. Then, quite suddenly, her beloved husband Harold was called ahead to Heaven in 1992, followed tragically by her second son Clayton in 2005. These were true challenges that many thought would be devastating and insurmountable: Rightfully so! Well, they never heard of the Lindemuth clan. While down momentarily, Sally showed many that she had it in her DNA to survive and get back up, perhaps stronger than ever. Instead of wavering, she took on a new task of cultivating, within her remaining extended family, her unwavering and amazing faith; to her siblings, her nieces and nephews, and eventually her grandchildren. For the most part, they all eventually saw the wisdom and truth in her beliefs. Of course, strengths can be weaknesses, and her strong will and personality were indeed in that category. She did have many less than stellar moments in life, where she got after someone for something that did not sit well; in some cases it would be with the blameless, and in many cases, not so much. This was not someone to cross swords with unless you were brave and very thick skinned. It is rumored that she is the only women able to attempt throwing a relative out of their own home, and be successful! That is, at least until they both had time to come to their senses, make-up, and have an even a richer relationship. Most of the time, she did come to her senses and realize that she had been too harsh. Sally eventually found her way to an easier pace of life at Epworth Villa, where she found a community of people to engage with, actively contributing to the social activity calendar. She rediscovered her joy of playing Canasta, dominoes, and of course being the social butterfly she was always so good at. When family members visited, they were sure the visit would involve Sally’s personal introductions to everyone they would encounter. This included the staff members, many of whom she formed close personal relationships over the course of 16 years as a resident in both Independent and Assisted Living. To the end of her life, she was always interested in meeting people and getting to know them more than just superficially. Faith remained a large part of her life while at Epworth, as she still had the energy to help form a Bible Study group and provide leadership and inspiration for those participating. Sally inspired all with her strong and unwavering faith and with her belief in the importance of family, continuing a rich tradition of staying connected and communicating. A one-of-a-kind, truly unique and special with both flaws and brilliance as all God’s children are. A funeral service is scheduled for 1:30 pm (CST) on Saturday 19 December at Crawford Funeral home in Edmond, Oklahoma. Reverend Doris Craddock will officiate. Attendance will be limited and have certain restrictions including social distancing and required wearing of masks. There will be an option to attend virtually via the internet by connecting to https://www.crawfordfuneralservice.com/ The Live Webcast link will come on 10 minutes prior to the service, here on our webpage. You can also click on the Photos & Video Tab or the Media Tab and there will be a link to the webcast starting tomorrow at 1:20 p.m. Flowers and condolences may be offered at https://www.crawfordfuneralservice.com/obituaries/

Sarah Jane Harper, known to many as Sally, passed away early Sunday 13 December 2020 at the age of 86 in Oklahoma City, Oklahoma. She was a devoted Christian and peacefully went to Heaven, joining her husband, son and many other beloved family... View Obituary & Service Information

The family of Sarah "Sally" Harper created this Life Tributes page to make it easy to share your memories.

Sarah Jane Harper, known to many as Sally, passed away early...

Send flowers to the Harper family.