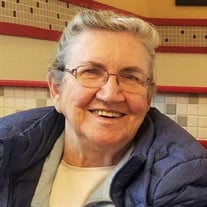 Sally Joan Franzoni was born in Carroll, Iowa on July 20th 1935 to Joseph and Mary Gertrude Gauderman. Her mother died on July 31st, just eleven days after her birth due to complications from childbirth. Sally was raised by her maternal grandparents Charles and Jennie Helmer until the marriage of her father to Laura. Joe and Laura moved from Iowa and settled in Eugene, Oregon and raised their family. Sally attended Catholic schools, finishing at St. Francis High School in 1953. At St. Francis, Sally accompanied the Orchestra as an extremely talented pianist. Sally was married to Harry Franzoni in March, 1956 and they made their home in Eugene, Oregon raising a daughter and two sons. After her children were grown, Sally worked for both Lane Community College and the University of Oregon as an administrative assistant. In April of 1967 Sally’s life was changed forever as she and her husband made their purpose known to accept the Lord and walk with Him. That was what Sally loved the most. Her belief that Jesus will return and she would meet her bridegroom one day. Sally enjoyed playing both the piano and organ and spent many years playing for the gospel meetings in Eugene. Sally moved to Oklahoma City in 2016 to be nearer her family. She took great joy in her grandchildren, David Jr., Jacob, Joshua, Andy, Sarah, Jeremy, Liam and Tyler. And her great grandchildren, Paisley, Kate, Cooper, Scarlett, Keegan, Josie and Maddie. In August of this year Sally was hospitalized after a fall and it was during her rehabilitation that she contracted the coronavirus, which was too great for her to overcome. She was preceded in death by her parents, husband, brother, Joe Gauderman and sister, Susan McCarthy. She is survived by a brother, Jim Gauderman of Cypress, CA, sister, Judy Gauderman of Sequim, WA. Daughter, Debbi Cole of Temecula, CA, sons, David (Peggy), of Choctaw, OK and Doug (Janice), of Hayden, ID. Eight grandchildren, seven great grandchildren and a host of friends. Services to remember and celebrate Sally's life will be held on Monday, October 26, 2020 at 11:00AM at Crawford Family Funeral Service in Edmond, OK. Visitation will be held the evening prior, Sunday, October 25, 2020 from 5:00PM-7:00PM. Burial will take place on a later date at West Lawn Memorial Park Cemetery in Eugene, OR.

Sally Joan Franzoni was born in Carroll, Iowa on July 20th 1935 to Joseph and Mary Gertrude Gauderman. Her mother died on July 31st, just eleven days after her birth due to complications from childbirth. Sally was raised by her maternal grandparents... View Obituary & Service Information

The family of Sally Franzoni created this Life Tributes page to make it easy to share your memories.

Send flowers to the Franzoni family.