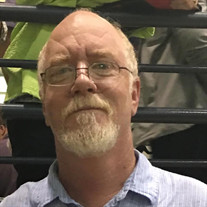 Rusty Persun, 58 years old passed away early September 25, 2021. He was born on September 8, 1963 in Oklahoma City, OK to Patsy(Patricia Jean) Persun and Ralph Persun. Rusty is survived by his children, Conal(24) and Liam(19) Persun. His sister Julie Walker of Allen TX, brother Bill Persun of Oklahoma City, OK, and sister Kris Persun of Conifer CO. He is proceeded by his brother Hal Persun, and his parents. He graduated from Putnam City West High School in 1981. He had many roles of mechanic, auto body painting and repair and selling roofs. In 1986, after he had been married a year to Dianna they moved to Colorado. From there they also lived in Pennsylvania, and Germany. The first trip to Germany was in 1994-1997 and then again in 1999- 2001. Rusty enjoyed visiting many different countries when they lived abroad. They visited, France, Belgium, Italy, Austria, Switzerland, Netherlands, London, Whales, and Denmark. During their travels, he explored various foods, which led him to trying to replicate various recipes and make them his own. He made it his personal mission to experience the taste and culture of a wide array of breweries scattered across Europe. He had a gift of making life long friends all along the way. He returned to Oklahoma from Germany in October of 2001 and resided in Oklahoma City until they moved to Edmond in 2011. Rusty loved his family, football, playing guitar and bass, traveling, making beer, working on and driving Porsches.

Rusty Persun, 58 years old passed away early September 25, 2021. He was born on September 8, 1963 in Oklahoma City, OK to Patsy(Patricia Jean) Persun and Ralph Persun. Rusty is survived by his children, Conal(24) and Liam(19) Persun. His... View Obituary & Service Information

The family of Rusty Milton Persun III created this Life Tributes page to make it easy to share your memories.

Send flowers to the Persun family.