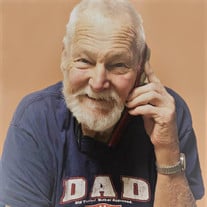 Ronald LaMont Grant, 82, of Guthrie, OK, passed away peacefully, Saturday night, February 26, 2022, surrounded by family in the comfort of home. Ron was born October 19, 1939, in Long Beach, California, to Frank Grant and Kathryn (Smoot) Grant-Spradling. He attended Long Beach public schools while living with his grandmother. Ron was an avid bowler and participated in multiple leagues for many years. He could be found at 89er bowl several nights a week. He liked to enter tournaments and even made it to a national event in Washington DC. He also enjoyed playing Golf with his dad Frank Grant at Cedar Valley Golf Course and several others until Frank moved out of state. He loved sports on television and in person. Many Friday evenings he could be found at THE ROCK with his buddy Tim watching Guthrie High School football or watching OKC Thunder with his wife. His favorite professional football team was the Rams, he was so excited when they won the Superbowl this year. He was a devoted dad, grandfather, brother and friend. He dedicated the last several years taking care of his wife Georgia until he was no longer able due to his declining health. After multiple hospital stays, Ron moved into his daughter’s home in January 2022. He enjoyed being around family and expressed how he was so lucky to have such a wonderful family. Ron loved to joke, laugh, and enjoy life to the fullest. He never met a stranger and was quick to become friends. People who met him for even a short time would comment about him being a “character” and how his joyful personality was very infectious. He is survived by his spouse Georgia Grant, sisters Cathy (Bud) Johns, Debbie Desgranges, Tay Shareck, Marvel (Dave) Domski, brothers Michael (Sheryl) Grant, William (Nancy) Ditton. His children Alice (Norm) Stevenson, Charlotte Richardson, Sarah Woods, Charles (Jamie) Sweet, Tammy (Bob) Owen, Jerry (Pam) Adair, Margaret (Ray) Clifton, Joe Richardson, granddaughters Christina Stevenson (Scott Pedersen), Destinee Newkirk, Hailey Sweet, grandsons Steven (Amber) Stevenson, Michael Stevenson, Bobby Sweet, Matthew Stevenson, four great-grandchildren, one great-great grandson, numerous nieces and nephews. He is preceded in death by his mother Kathryn Smoot Spradling and her husband Ray, his father Frank Grant and wife Dorine, and his brothers Christopher Grant and Marvin Ditton. Celebration of Life – Saturday, May 21, 2022, 1:00-3:30pm at Lakeview Church – Fellowship Hall, 122 W. Seward Rd., Guthrie, OK 73044.

The family of Ronald Grant created this Life Tributes page to make it easy to share your memories.

Send flowers to the Grant family.