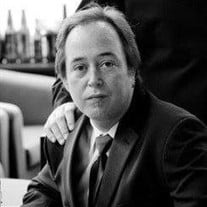 Ronald Wayne Dye, Jr., age 49, of Edmond, OK., died on Friday, September 27, 2019. His mother, Joan E. (Dobson) Dye and father, Ronald Wayne Dye, Sr., were very excited to welcome their boy, “Wayne”, on December 12, 1970 in Oklahoma City, OK., at Tinker Air Force Base. Wayne attended school and lived in Edmond, OK throughout most of his childhood. He graduated from Edmond Memorial High School in 1989, then attended UCO for vocal music in the following years. Wayne had a beautiful voice and his singing was uplifting to all those around him. During his adulthood, Wayne worked as a Karaoke Host and DJ for 20 years. While working one of his many shows, he met the love of his life, Katherine (Armstrong) Dye, who he would wed in 2002. His outgoing spirit and friendly personality attracted the love of many friends and family. His contagious smile was sure to make you grin from ear to ear. Wayne was the life of the party. His favorite saying was “may the force be with you!”, making his love for Star Wars evident. He absolutely loved everything Lord of the Rings, and Sci-Fi. Wayne was kind to everyone he crossed paths with, and he will be so missed by his family and friends. Wayne is survived by his parents, Joan and Ronald Dye Sr.; wife, Katherine Dye; children, Phoenix Dye, Britany Stack, and Audrey Johnson; brother, Chris Dye; grandchildren, Caden, Bayleigh, and Demi; uncle, Mike, and many nieces and nephews. A celebration of life for our beloved Wayne will be held on October 5th, 2019 at Crawford Family Funeral Service at 10:00am. Pastor Paul Blair will be attending the service to speak on the family’s behalf.

The family of Ronald Wayne Dye Jr created this Life Tributes page to make it easy to share your memories.

Send flowers to the Dye family.