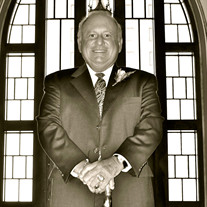 On Thursday, January 24, 2019, Ronald W. Buel, brother, father and grandfather, passed away at age 78 in Edmond, Okla. Born in East St. Louis, Ill., on June 14, 1940, Ron grew up in Collinsville, Ill., and was president of the Collinsville High School class of 1958. After high school, Ron attended Drake University in Des Moines, Iowa. He received his B.S. in Business Administration in 1962. After graduating from Drake, Ron started what would become a 30+ year career with then Standard Oil. During his tenure he held various executive management roles in differing geographic regions, including the Quad Cities, Minneapolis, Kansas City, Denver and Des Moines. It was upon his return to Des Moines where Ron would reconnect with his alma mater and find his true passion for giving back, both philanthropically and financially. From the late 1980s to present, Ron has “bled blue,” giving unrelentless attention to the Drake University community, even being adorned with the nickname ‘BuelDog,’ an ode to the Drake Bulldog mascot. Within the university system, Ron specifically connected with the department of athletics and made it his mission to help provide world-class excellence to each and every student-athlete. Though Ron made financial contributions to enhance the athletic infrastructure across campus, including the eponymous Ron Buel Field for softball, it was his role as a constant figure on the sidelines of each and every sport that brought him true joy. In his time as a Drake Bulldog fan, Ron connected with thousands of student-athletes on a personal level. “My joy is watching the student-athletes come in as freshmen and see them grow and leave as seniors well on their way,” Buel said in a 2016 interview. During his more than three decades of intense support for Drake University, Ron’s roles included: team captain for the Bulldog Scholarship Fundraising Campaign for eight consecutive years, serving on the Bulldog Scholarship Fund Board of Directors, President of the National Alumni Association, President’s Circle Council member, Francis Marion Drake Society member, Drake Relays Executive Committee member, and 1997 recipient of the Golden Bulldog Award. He also came out of retirement during his time back on campus and served over three years as Director of Alumni and Development for the College of Business and Public Administration. Although Ron took great pride in being called ‘BuelDog,’ it was his title as ‘Papa’ in recent years which brought him the most joy. He will be lovingly remembered by his grandson Wells, son R.W. (Erica), Edmond, Okla., and brother Kenneth A. Buel (Margaret), Champaign, Ill. He will also be fondly remembered by two nephews, Robert F. Buel (Nancy), Oswego, Ill. and Allan F. Buel (Tammie), LaPorte, Ind.; and a niece, Joan T. Tompkins (Robert), Antioch, Tenn. He is preceded in death by his parents, Kenneth F. and Madeline J. (Ronchetti) Buel. He was married to Patricia Pechar from 1971 to 1991 and Sherry Linder from 1994 to 2010. Ron will be laid to rest with is parents at Lake View Memorial Gardens in Fairview Heights, IL. Memorial contributions may be directed to: Drake University, Attn. Bulldog Club, 2507 University Avenue, Des Moines, Iowa 50311. To read a tribute published by Drake University, please click on the link below https://godrakebulldogs.com/news/2019/1/24/drake-athletics-mourns-the-passing-of-longtime-supporter-ron-buel.aspx Drake University is planning on having a service, to honor and celebrate the life of Ron on Saturday, April 13, 2019. Please click on the link below for more details https://godrakebulldogs.com/news/2019/4/2/softball-drake-athletics-to-host-celebration-of-life-for-ron-buel.aspx

On Thursday, January 24, 2019, Ronald W. Buel, brother, father and grandfather, passed away at age 78 in Edmond, Okla. Born in East St. Louis, Ill., on June 14, 1940, Ron grew up in Collinsville, Ill., and was president of the Collinsville... View Obituary & Service Information

The family of Ron Buel created this Life Tributes page to make it easy to share your memories.

Send flowers to the Buel family.