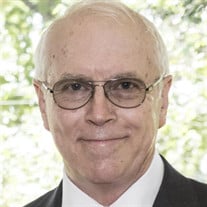 Major Roger Sloan Laubhan, USAF Retired, of Edmond, Oklahoma passed away on December 13, 2021. He was born to Victor and Eilena Laubhan on February 6, 1951 in Enid, Oklahoma. Roger grew up on the family farm west of Ames, Oklahoma, learning the many skills required of farming and gaining lifelong friends from Ames Public School and the community. He was a member of the Ames Church of Christ and remained steadfast in the Lord all his life. He eventually served as an elder at the Westwood Church of Christ, Edmond, Oklahoma. Roger graduated from Oklahoma State University with a degree in aeronautical technology. While there, he met his future wife Brenda Baber, whom he married on May 20, 1973. Roger had an exciting and gratifying career in the United States Air Force with duty assignments in Delaware, Enid, Oklahoma, North Carolina, Altus, Oklahoma, Ohio and Hawaii. He graduated from pilot training and then flew the KC-135, which was used for midair refueling of military planes. He also served as an aircraft maintenance officer. After his retirement from the Air Force, he was employed in the field of telecommunications, working for several different companies in the Oklahoma City and Enid areas. He collected many cherished friends from every place he lived and worked. A wonderful life blessing for Roger and Brenda was the birth of their son Joshua Warren. The joy of a son was multiplied when Josh married Courtney Bullock and then grandson Warren Leon was added to their family. Roger and Brenda have made their home in Edmond for the past twenty-five years. His favorite part of their house was his workshop, where he took pride in painstakingly restoring special antique pieces and crafting beautiful woodworking projects. He also loved going to Colorado, where he spent many wonderful days sightseeing, hiking and snow skiing with his family. Roger was preceded in death by his parents and a sister Sharon Ann Van Arsdale. He is survived by his wife Brenda, son and daughter-in-law Josh and Courtney Laubhan, grandson Warren Laubhan, sisters Christy and John Sheffield and Vickie and Shawn Tuohy, brother-in-law Bob Van Arsdale, mother-in-law Frances Baber, sisters-in-law Susan and Mike Newberry and Beverly and Kelly Friedl and brother-in-law Chuck and Cheryl Baber. He also leaves behind an aunt, Velma Lee Laubhan, and many treasured nieces and nephews, cousins and neighbors, as well as dear brothers and sisters in Christ. A memorial service will be held at the Westwood Church of Christ at 11 a.m. on Friday, December 17, 2021.

Major Roger Sloan Laubhan, USAF Retired, of Edmond, Oklahoma passed away on December 13, 2021. He was born to Victor and Eilena Laubhan on February 6, 1951 in Enid, Oklahoma. Roger grew up on the family farm west of Ames, Oklahoma, learning... View Obituary & Service Information

The family of Major Roger Laubhan created this Life Tributes page to make it easy to share your memories.

Send flowers to the Laubhan family.