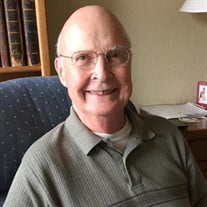 Robert Joseph Reddy, 93, passed away peacefully on Thursday, April 22, 2021 in Edmond, OK. Bob was born on October 22, 1927 in Staten Island, NY, the 3rd of 6 sons born to Raymond and Edith Reddy. At 17, Bob enlisted in the US Army Infantry and was deployed to Germany as a part of the 14th Infantry Regimental Combat Team. He then joined the 26th Infantry, 1st Division and was assigned at the Palace of Justice in Nuremburg during the War Crimes Trials. In July 1947, he returned state side and went to Columbia University when Eisenhower was Dean of the university. After Columbia, Bob entered the Air Force and went to pilot school at Perrin AFB, TX and then to navigator school at Ellington AFB, TX. In 1952, he flew 50 missions in B-26 aircraft over North Korea. Next, he was assigned to the 106th Radar Calibration and Evaluation Flight in Sioux City, IA. There he met and married Darcrea Jane Dye. He flew B-29s testing radar networks and went to the Air Force Institute of Technology and received a BS in Engineering. Bob then reported to Hill AFB, UT where his son David was born, and then, Wright Patterson AFB, OH where his daughter, Teresa, and son, Daniel, were born. He was then a flight test engineer at Edwards AFB, CA where his daughter, Michele, was born. He was assigned to Cape Canaveral, FL followed by the University of Chicago for an MBA. After that, Bob went to Japan as a part of the Foreign Technology Division to collect Soviet and Chinese information. He then went to Hanscom Field, MA to work at the Cambridge Research Laboratory. From there, he flew 416 sorties in a C-123 over Vietnam. He was then assigned to Holloman AFB, NM to conduct high altitude balloon tests. Bob finished his military career returning to Hanscom Field, MA standardizing air-to-ground communications. After 28 years of service, including 3 wars, Bob retired to Albuquerque, NM and built himself, with the help of family and friends, his dream house in the Jemez Mountains. When the house was almost complete, he married Ann Joerns Caffrey, mother of 11 grown children. Together, they travelled the states, including AK, in their 5th wheeler. As his eyesight was failing, Bob moved to Edmond, OK, to be close to his daughter, Michele. Bob is preceded in death by his ex-wife, Darcrea, his wife, Ann, his parents, his brothers: David, Richard, Paul and Reginald Reddy, his son Daniel Reddy and 3 step-sons: Phillip, Christopher and Daniel Caffrey. He is survived by his brother John (Marie) Reddy; his children: David (Betty Duffy) Reddy, Teresa Reddy, and Michele (Joe) Davey; 2 step daughters: Ann Marie Caffrey and Cecilia (Rick) Colucci; 6 stepsons: John (Bettina), Richard (Rebecca), Timothy (Joy), Kevin (Joanne), Brian (Kathy), and Michael (Liana) Caffrey; grandchildren: Seana Duffy Reddy, Lara (Doah) Detloff, Elyse Van Zandt, Ryan (Claudia) Reddy, John Meierdierks, Danelle (Mitchell Sanchez) Reddy, Brienne (Brandon) Alexander, Megan (Ron) Taggart, Jackie (Andrew) Perry, Rachel (Joe) Lewis, and Scott (Katelyn Fietz) Davey and numerous step grandchildren and great grandchildren, nieces and nephews and great nieces and nephews, as well as his dear friend Shirley Jackson. We will remember his generosity, his love of his wonderful large family and his stories. He will be missed. The family would like to thank his Mercy hospice nurse, Wendi, his caretaker, Lilly, and his caretakers at Autumn Leaves for their care, professionalism, and dedication during these COVID times. They are angels among us. A private family graveside service with full military honors, conducted by the United States Air Force, will be held to remember and celebrate Robert's life, at Santa Fe National Cemetery.

Robert Joseph Reddy, 93, passed away peacefully on Thursday, April 22, 2021 in Edmond, OK. Bob was born on October 22, 1927 in Staten Island, NY, the 3rd of 6 sons born to Raymond and Edith Reddy. At 17, Bob enlisted in the US Army Infantry... View Obituary & Service Information

The family of Lt. Col. Robert Reddy created this Life Tributes page to make it easy to share your memories.

Send flowers to the Reddy family.