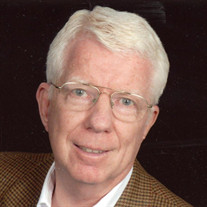 Robert Marcellus “Monte” Akridge, 81, passed away on January 30, 2021 at his home in Edmond, OK. Monte was born on August 11, 1939, in Canadian, TX, to Henry Harold and Elsie Lillian (Walker) Akridge. Monte’s early education began at Deer Creek Schools as his father was a wildcatter in the West Field near Deer Creek. Monte first attended Lynch two-room schoolhouse, and then in fourth grade, continued his education through tenth grade at Deer Creek’s School Complex. Monte proved to be an excellent student, developed an interest in playing the clarinet, and enjoyed athletics, playing basketball, and baseball. During his sophomore year, his family moved to Purcell, where Monte played American Legion Baseball while working at his father’s service station. Due to his dad’s health, the family relocated to Edmond at the beginning of his junior year. Monte thrived at Edmond High School as he was able to participate in both baseball and basketball and was named to the all-state band. He graduated in 1957 and was awarded a music scholarship to attend Central State College in Edmond, now called the University of Central Oklahoma. Monte’s college experience was a tremendous success. He was named to “Who’s Who” during his junior and senior year. He played in the band, was a member of the President’s Club, was a varsity tennis letterman, and newspaper sports editor. He financed his education by working at Tastee Freeze and both the college bursar and journalism offices. In his free time, he could be found at the Student Union playing pool, on the tennis courts—playing the sport he taught himself—or at the Baptist Student Union (BSU) playing ping pong. Monte graduated a semester early in December 1960, receiving a degree in education, majoring in mathematics and journalism, and minoring in physics. That spring, he began teaching math at Southeast High School in Oklahoma City and coaching tennis. He also began dating Celia Chance, a transfer student from Oklahoma Baptist University who he met at the BSU in April 1961. As Celia was a journeyman missionary that summer, they corresponded by letter, and their romance blossomed. By September, they knew they would marry and were married March 3, 1962 at First Baptist Church in Perry, Oklahoma. The local newspaper headline announced their engagement: “Akridge takes a Chance.” In June 1962, Monte enlisted in the National Guard and served six years. After six months of basic training, Monte returned to teach math and coach basketball at Oklahoma City’s Hoover Junior High in January 1963 while serving in the Guard on weekends. Monte’s mathematics mind gave him a gateway to becoming a programmer analyst for National Cashier Register (NCR), then working for Consolidation Computer Systems, serving as Sales Vice President. He returned to NCR as a Regional Sales Manager. In 1986, Monte was recruited by Baptist Healthcare of Oklahoma to serve as their Executive Vice President, Chief Operations Officer. Monte coordinated the merger of Baptist Healthcare of Oklahoma into Integris Health in 1996 and then served as Vice President of Legislative Affairs coordinating both State and National lobby efforts before retiring in 2011. Monte led others well, was esteemed for his integrity, and had an ability to create collaborative consensus. He was a founding board member of the Parkinson’s Foundation of Oklahoma. He desired to provide hope to Oklahomans who share the same disease he had for 20 plus years. Over the course of his life, he sang in the choir and served as a deacon at Edmond First Baptist Church and Henderson Hills Baptist Church. He served as a men’s leader for Bible Study Fellowship and, until his passing, attended Crossings Community Church. He enjoyed playing golf and tennis and always enjoyed his morning newspaper. Monte loved his wife of 59 years exceptionally well. He was a great provider, a role he cherished. Family was especially important, and he made his children and grandchildren a priority. He loved to plan vacations, and he and Celia traveled extensively. His passion for travel was so great that he shared “Akridge Adventures” with his children and grandchildren taking them on eleven family vacations. He would often say this was his favorite week of the year as he got to reconnect with the souls of his loved ones. Monte is survived by his wife, Celia Lois Akridge; son, Robert Jay Akridge and his wife Debra Jo of Edmond, Oklahoma; and daughter Anita Lynn (Akridge) Potts and her husband Terrance Joseph of Bartlesville, Oklahoma. Monte leaves four grandchildren: Ryan Akridge and Reagan Akridge of Edmond, Oklahoma; along with Samantha Potts of Houston and Sydney Potts of Norman, Oklahoma. Visitation will be Thursday, February 4, 2021 at Crawford Funeral Services, 6 pm to 8 pm. Burial will be Friday, February 5, 2021 at Memorial Park Cemetery, 2 pm. In lieu of flowers, Monte and his family have requested donations be given to the Parkinson Foundation of Oklahoma Endowment Fund https://parkinsonoklahoma.com/donate/.

The family of Robert "Monte" Akridge created this Life Tributes page to make it easy to share your memories.

Send flowers to the Akridge family.