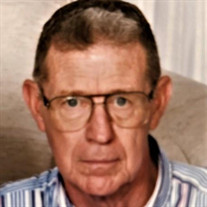 Robert R. “Bob” Jones passed away on January 10, 2021, in Edmond, Oklahoma. Bob was born on September 6, 1933, in Keokuk, Iowa to Leonard and Helen Jones. Bob served in the U.S. Army. After his service in the Army, he spent most of his adult life working in the corrugated packaging (“box”) industry, working for several different national companies in Iowa, Wisconsin, and for most of his career in the Dallas/Fort Worth, Texas area. He was an expert on all things “boxes” and had the respect of the many co-workers he mentored in his over 50 years in the business. He retired as Production Manager from Green Bay Packaging in Fort Worth in 2004. In retirement, he was much loved in his neighborhood by several generations of children, who all called him “Mr. Bob”. Bob is survived by his wife of 47 years, Shirley, his step-sons and spouses, Scott and Lynn Fleming, Randy and Karen McGill, and Gary and Laura McGill, his daughter and son-in-law Kim and Tim Collier, his grandchildren, Brian McGill, Shannon Herron, Benjamin Fleming, Patrick Collier, and Peter Collier, and 5 great-grandchildren. Bob was preceded in death by his parents, both in Keokuk, Iowa, and his many much-loved dogs and cat, including Sally, Bucky, Maggie, Dossie, and Mooch.

The family of Robert Jones created this Life Tributes page to make it easy to share your memories.