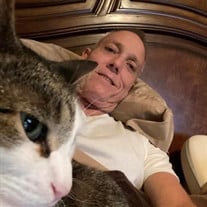 Robert Jeffrey Johnson of Edmond, Oklahoma passed away peacefully during the night at his home on September 23rd, 2021 at the age of 51. He was born on June 6th, 1970 in Oklahoma City, Oklahoma to Lyn and Barbara Johnson. He lived in Oklahoma for all 51 years and knew it as home. Robert graduated from Eastern Ave Christian Academy in 1988; but for most of his high school years, he attended Living Word Academy. Robert played soccer in junior high, which he loved. Then he went on to play table tennis and at only 16 years old he competed in the Junior Olympics against other teenagers from around the world. He was always so hard-working, even as a teenager, he had a thriving lawn mowing business during the summer months. Right after High School, he got his first job in the car business as a lot porter for Dub Richardson Ford. He then moved up to salesman and sold Conversion Vans. After that, he went to work for Reynolds Ford and held several different job titles including: salesman, finance manager, & new car manager. Robert opened the first Hertz car sales store in Oklahoma and was the General Car Sales Manager for them. When he wasn't working selling cars his favorite things to do were spending time with his kitties and family, watching some of his favorite shows, cooking in his airfryer, and playing fantasy football or poker with his buddies. Robert faced so many challenges and obstacles throughout his life, but even through those challenges he made sure to make the people around him feel loved and taken care of. Robert loved his family more than anything, especially his mother, Barbara. He was such a good brother to his sister, Carol and uncle to her two boys, Spencer and Garrett. He was the best father to his two children, Brandon and Maddie. Some favorite memories include: spending Sundays together eating his favorite pasta dish that he made (paprika), going fishing at the pond, spending holidays together at Barbara and Lyn’s house, going to hibachi for every special occasion, and so many more. He loved his redheads so much and made it so known to everyone around him. Shortly after Robert passed away, his father, Lyn, went to join him in heaven. While his family misses him so very much, they are taking comfort knowing that Lyn and Robert are there together. A service honoring Robert’s life will be at 2:00PM, Friday, October 1, 2021 at Crawford Family Funeral Service in Edmond, OK. Services will be made available via livestream for those not able to attend in person.

Robert Jeffrey Johnson of Edmond, Oklahoma passed away peacefully during the night at his home on September 23rd, 2021 at the age of 51. He was born on June 6th, 1970 in Oklahoma City, Oklahoma to Lyn and Barbara Johnson. He lived in Oklahoma... View Obituary & Service Information

The family of Robert Jeffrey Johnson created this Life Tributes page to make it easy to share your memories.