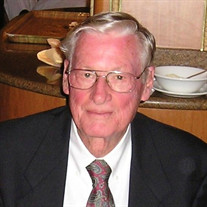 A live stream of Bob's service can be found here: https://www.facebook.com/crawfordfuneral Robert (Bob) Stirling Wilson Jr., 86, passed suddenly on October 14, 2020. He was born on July 28, 1934, along with his twin sister Nancy to Robert and Anne Wilson in Cranston, Rhode Island. Early in Bob's childhood, the family relocated across the country to California, where he would spend his youth growing up in Santa Barbara. After graduating from Santa Barbara High School, Bob joined the Navy and served during the Korean War as part of the Navy Air Force. He was stationed in the Philippines during his service. He was assigned to a photo-reconnaissance squadron where he flew on a B-24 (PB4Y) and assigned parachute packer duties. Bob always had a passion for flying. That passion took him into the aeronautical industry after his time in the service. He started his career in business working for Hughes Aircraft in the mid-50s as a draftsman. He would eventually move over to Northrop, where he worked on projects like the avionics housings for the SR-71 Blackbird. However, his greatest accomplishment while at Northrop was meeting and falling for Christine (Christy), the lifelong love of his life. They married in 1967 and spent 47 beautiful years together before Christy preceded Bob in death in 2014. Bob and Christy had one son, Dru, and daughter-in-law Misty and were proud grandparents of their two grandchildren, Avery and Gavin. Bob is also survived by his twin sister Nancy of Evans, GA. Bob was preceded in death by his parents. In addition to being a loving grandfather, he was also a proud uncle of several wonderful nieces and nephews. In the late 70s, Bob and Christy relocated to Oklahoma, where he started a new and fulfilling career with Oklahoma Gas and Electric from which he retired in 99'. Bob was an avid outdoorsman and was always happiest with a fishing pole in his hand. After retirement, he and Christy spent time traveling and enjoying each other's company. Bob could always be found with his nose in a book reading about the fantastic adventures of spies and war stories or "shoot’em up bang bangs" as he would call them. Bob attended Henderson Hills Baptist Church for 25 years. He was a quiet Sunday staple until it became difficult to get out and around any longer. We will miss the sweet nature, quick wit, and fascinating stories of our family's version of John Wayne. We are blessed to know that Bob and Christy are embraced together again in heaven due to the redeeming power of Jesus Christ. In lieu of flowers, memorial donations may be made in Bob’s name to the Missions Ministries at Henderson Hills Baptist Church. A service celebrating Bob’s life will be at 11:30am on Tuesday, October 20th at Crawford Family Funeral Service with burial following at Gracelawn Cemetery. A live stream of Bob's service can be found here: https://www.facebook.com/crawfordfuneral

A live stream of Bob's service can be found here: https://www.facebook.com/crawfordfuneral Robert (Bob) Stirling Wilson Jr., 86, passed suddenly on October 14, 2020. He was born on July 28, 1934, along with his twin sister Nancy to Robert... View Obituary & Service Information

The family of Robert “Bob” Wilson Jr created this Life Tributes page to make it easy to share your memories.

A live stream of Bob&#39;s service can be found here: https://www.facebook.com/crawfordfuneral

Send flowers to the Wilson family.