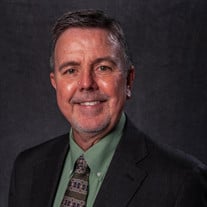 Robert Price Mayfield was born February 26, 1956 in Post, TX. He was called home March 4, 2021 after a 4 year battle with cancer. Bob and his parents moved to Lubbock, TX early in his life. He attended Monterey High School and Texas Tech University. Following graduation from Tech, he served churches in Fort Worth and Tyler while attending Southwestern Baptist Theological Seminary where he earned his master’s degree in religious education. Upon graduation from seminary he served as youth minister at First Baptist Church Waxahachie where he met and married Tracy Cunningham Mayfield. He also served at Westbury Baptist Church in Houston. Bob was called away from Houston to serve as Education Minister at Indiana Avenue Baptist Church in Lubbock, TX and First Baptist Church in Chandler, AZ. During his years as education minister, he developed strategies to disciple believers and evangelize the community. These strategies led to his time or service to the Arizona Baptist Convention and later at the Baptist General Convention of Oklahoma. Bob worked tirelessly to help churches develop leaders, grow small groups, and disciple believers to impact their communities for Christ. For Bob, ministry was a lifestyle and he loved teaching others to minister to those around them. He loved the outdoors. If he was on the banks of water fishing or in the fields hunting, Bob was happy. He was talented at woodworking and enjoyed being in the stands at baseball games. Bob loved coffee – lots and lots of coffee. He is survived by his wife, Tracy; son, Zachary; and daughter, Mary Kathryn. He will also be missed by his father, Dowe Mayfield of Lubbock, TX; 2 sisters, Susan (Lindsey) Dingmore of Aledo, TX and Kay (Brian) McMath of Plano, TX; a brother, Chuck (Mitzi) Mayfield of Georgetown, TX; as well as numerous nieces and nephews. A service celebrating Bob’s life will be at 2:00pm on Friday, March 12th at Edmond’s First Baptist Church. Memorial donations may be made in Bob’s name to a ministry of your choice. The service can be viewed via livestream at https://www.fbcedmond.org/livestream

Robert Price Mayfield was born February 26, 1956 in Post, TX. He was called home March 4, 2021 after a 4 year battle with cancer. Bob and his parents moved to Lubbock, TX early in his life. He attended Monterey High School and Texas Tech University.... View Obituary & Service Information

The family of Robert "Bob" Mayfield created this Life Tributes page to make it easy to share your memories.

Send flowers to the Mayfield family.