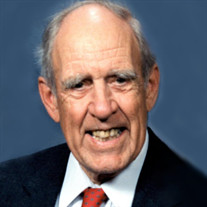 Richard Anderson Haxton passed away in the early morning hours of March 10, 2020 at the age of 95 years, 8 months and 22 days in Edmond, Oklahoma. Mr. Haxton was born north of Gotebo, Oklahoma on June 17, 1924, the second son of Bernard Gale and Barbara Anderson Haxton. The family farmed in the Lake Valley area, where he attended school in his early years. He attended high school in Gotebo, where he played football and wrestled. Richard enlisted in the Navy after high school graduation and was in the South Pacific during World War II. He was a Bosun’s Mate on the USS Delphinus, a frozen food cargo ship that toured the island groups in the South Pacific to deliver food to the troops stationed there. The main port of call for the ship was Auckland, New Zealand. It was there that he met his wife and soulmate, Fay Josephine Haxton. One of his shipmates had talked him into attending a dance in Auckland. At the dance, he spotted his future wife sitting across the room with a group of young women. Attracted by her red haired beauty, he got up the courage to ask her to dance. This started a romance that resulted in their marriage. Once he left the Navy, Richard traveled back to the United States to be honorably discharged, with a final rank of Boatswain’s Mate Second Class, on February 12, 1946. He immediately got on a ship and headed back to New Zealand to rejoin Fay. They were married on June 8, 1946. The couple settled in Karaka and then Puhoi, north of Auckland. Richard took a job as a truck driver and delivered fresh milk and other dairy products in the area. Richard and Fay had two children, Paul Richard Haxton, born September 20, 1947 in Auckland and Dianne Barbara Gale Haxton, born October 23, 1950 in Pueblo, Colorado. Richard and Fay made the decision to return to the United States in 1949. He went to work as a surveyor for the DeLeau Cather Company, which engineers highway and other transportation projects. As a result of his employment, the family moved many times, including multiple stops in Colorado, New Jersey, Florida and Oklahoma. In all they lived in 26 different homes during this time. However, in 1960, the family decided they needed to settle in one place for the benefit of the children, who were constantly changing schools. Richard took a job with the Oklahoma State Highway Department, and the family moved to Perry, Oklahoma. It was in Perry that Richard and Fay developed a love for square dancing. Richard became a caller, and they started a youth group consisting of high school students who wanted to learn to dance. In 1966 Richard went back to work for DeLeau Cather, and the family moved to upstate New York. Paul was now a college student, but Dianne moved with the family. The following year she decided to return to Perry to complete high school. Richard and Fay lived in New York and Connecticut up until their retirement. Richard had always wanted to live in the Ozarks, so the couple moved to Salem, Missouri for their retirement years. As residents of Salem, they became active in the community and made many friends. They became faithful members of the Cumberland Presbyterian Church, joined a writing club, attended bluegrass concerts and worked hard for the Dent County Animal Welfare Society. They were instrumental in the building of a new facility for the animal welfare group. And Richard was one of the founding members of a local bluegrass band, which performed in many venues in the area, mostly nursing homes. He took a great deal of joy in performing for the residents. His favorite instrument was the mandolin, which he played up until his death. Richard was also an avid sports fan and particularly loved to watch the Oklahoma State Cowboys play football. Richard lost his beloved Fay on April 4, 2016 at the age of 89. They had been married for nearly 70 years at the time of her passing. They will now rest side by side in Salem. Richard was preceded in death by his parents, Bernard Gale Haxton and Barbara Anderson Haxton Hunzinger, brothers Jim and Don, along with their spouses Fran and Joyce. He is survived by his children Paul, of Edmond, Oklahoma and Dianne, of China Spring, Texas along with their spouses Judy and Joel (Hurley). Also, there are four grandchildren, Brenda Biondi Oliver and husband Dylan of Half Moon Bay, California, Steven Biondi and wife Dana, of Phoenix, Arizona, Geoffrey Haxton and wife Jennifer of Lubbock, Texas and Christopher Haxton and wife Courtney of Edmond, Oklahoma. In addition, he is survived by six great grandchildren, Jackson and Eli Oliver and Cameron, Perry, Hunter and Mickie Haxton. He is survived by many other loving relatives, including favorite niece Nancy Nowlin and husband Steve, and nephew Robert Haxton and wife Elaine. And finally, Richard will be greatly missed by Fay’s sister Janine and husband Ross Gordon, Auckland, New Zealand. Richard will be dearly missed by all who knew him. In his final days at Touchmark, he was known to be a very kind person, and the staff grew to love him. The same can be said for the wonderful people at Physician’s Choice Hospice, who helped him greatly during the last five months of his life. Of course, his family will miss him the most. He will be remembered as an intelligent, compassionate, loving, kind man who never had a cross word for anyone. Memorial services will be held on Friday, March 13th, 10:00 a.m., at Crawford Funeral Service, 610 NW 178th Street, Edmond, Oklahoma, 73012. Graveside services will be held on Monday, March 16th, at 10:00 a.m., officiated by the Cumberland Presbyterian Church, at Cedar Grove Cemetery, Salem, Missouri. In lieu of flowers, the family would like to suggest donations to the Dent County Animal Welfare Society, 5358 S, MO-19, Salem, MO 65560, New Hope Cumberland Presbyterian Church or Physician’s Choice Hospice of Edmond.

Richard Anderson Haxton passed away in the early morning hours of March 10, 2020 at the age of 95 years, 8 months and 22 days in Edmond, Oklahoma. Mr. Haxton was born north of Gotebo, Oklahoma on June 17, 1924, the second son of Bernard Gale... View Obituary & Service Information

The family of Richard Haxton created this Life Tributes page to make it easy to share your memories.

Richard Anderson Haxton passed away in the early morning hours...

Send flowers to the Haxton family.