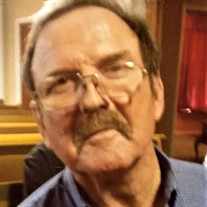 Richard Franklin Gentry, 70, of Edmond, OK, passed away peacefully at home, Monday morning, September 9, 2019, surrounded by his loving and caring family. Richard was born August 25, 1949 to Edward and Betty Gentry, in Wewoka, OK, and was one of 13 children. Richard spent his early years growing up in Wewoka, while also helping his father, working in the oil fields as a driller. Richard would later serve his country during the Vietnam war, from 1968-1972. Once his service was complete, Richard returned home to the United States, where he then moved to California for a short while, before moving back to Oklahoma. Richard spent most of his working life as a truck driver, where he owned and operated his own business for over 45 years. He loved being on the open road, while enjoying the peace and quiet it brought with it. Richard loved being out on the water boating and spending time in the garage working on sports cars. From an early age he took the liberty of being his family’s protector. Not only looking over his younger siblings, but also helping his mother out in what ever way he could. He was an amazing son, brother, father, and husband, and will be missed dearly by all. In passing, Richard is survived by his wife, Vonda; his five children, Kameron Gentry, Cassidy Gentry, Suzane Matel, Sherri Barry, and Shawna Hamner; as well as 11 grandchildren. Also surviving Richard are his siblings, Sherri Gentry of Edmond, OK, Lynda Cowans of Arcadia, OK, Sue Brown of Guthrie, OK, Starla Longest of Edmond, OK, and Curtis Gentry of Konawa, OK. Richard was preceded in passing by his parents, Edward and Betty, along with siblings, Penny, Kenny, Robert, Brenda, Terri, Rosemary, and James.

Richard Franklin Gentry, 70, of Edmond, OK, passed away peacefully at home, Monday morning, September 9, 2019, surrounded by his loving and caring family. Richard was born August 25, 1949 to Edward and Betty Gentry, in Wewoka, OK, and was one... View Obituary & Service Information

The family of Richard Franklin Gentry created this Life Tributes page to make it easy to share your memories.

Send flowers to the Gentry family.