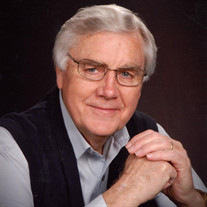 Richard Dale Bond was born September 3, 1943 in Lawrence, KS to Otis and Gladys Bond. He died from complications of COVID-19 on January 9, 2021 in Edmond, OK. Richard grew up on a farm near Cimarron, Kansas and graduated from Ingalls High School in 1961. During his time at Ingalls High School he played basketball, running back for the Ingalls Bulldogs, and placed 3rd in the state track meet. Upon graduation, Richard moved on to further his education at Southern Nazarene University where he served as the editor of the newspaper as well as president of the student body. He graduated from SNU in 1965 and then went on to earn his doctorate from Nazarene Theological Seminary in pastoral education. Richard loved his Kansas upbringing and looked forward to working the harvest every year in western Kansas. He was a collector as well. He collected watches, boxes, money clips, and Bibles. Later in life, the simple things brought him joy. He enjoyed reading, watching the birds, watering flowers, bike riding, playing Rook, and certainly attending church and talking to people. In his work life, Richard’s positions always had a central theme: service to others. He spent time as a youth minister in Pasadena, CA; served as pastor of several churches including Louisville, KY, Antioch Nazarene Church in Overland Park, Kansas, and Penn Avenue Church in Oklahoma City; as well as serving at Blue Hills Family Life and Counseling Center in Kansas City. In 1990, he even wrote a book called A Journey into Prayer. If you had ever met Richard, you would see very quickly that he had a deep compassion to help others. In 1998, this compassion led him to start and become the director of OKC Compassion, a non-profit organization geared toward showing the Gospel of Christ by showing compassion to the disadvantaged and encouraging others to do the same. Recently at OKC Compassion, he had been overseeing many recovery houses and providing counseling and Bible Study for more than 60 residents of the houses. Richard was preceded in death by his parents; a sister, Donna Burns; and a brother, Larry Bond. He is survived by his wife, Sherry Bond; a son, Jeremy Bond and wife Becky; a daughter, Jeanna Roberts and husband Adam; as well as his grandchildren, Julia, Sophia, Brooklynn, Violet, and Boston. He will also be missed by siblings, Arlene Snowbarger, Eleanor Hoover, and Maxine Neufeld; as well as nieces, nephews, and friends. A service celebrating Richard’s life will be held at 11am on Monday, January 18th in Edmond. Attendance at the service will be limited to family. However, friends are encouraged to attend the service virtually through a Live Webcast found here: https://faithbibleok.com/live-stream If you would like to make a donation in Richard’s name to OKC Compassion send check to P.O. Box 75995 Oklahoma City OK 73147.

Richard Dale Bond was born September 3, 1943 in Lawrence, KS to Otis and Gladys Bond. He died from complications of COVID-19 on January 9, 2021 in Edmond, OK. Richard grew up on a farm near Cimarron, Kansas and graduated from Ingalls High School... View Obituary & Service Information

The family of Rev. Richard Dale Bond created this Life Tributes page to make it easy to share your memories.

Send flowers to the Bond family.