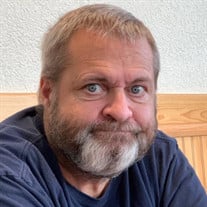 Rex Wade Ratliff was born on January 20, 1965, to Orla and Betty Ratliff in Perry, Oklahoma. He was their fifth child, and his birth completed the family. On Jun 7th, 2022, Rex went to his Heavenly Home to be with his Savior. He spent his childhood and youth on the family farm in Red Rock, Oklahoma, graduating from Red Rock High School in May of 1983. In May of 1985, Rex obtained an associate degree from Northern Oklahoma College in Business. Rex’s parents were pleased when he graduated from the University of Central Oklahoma with his bachelor’s degree. With his graduation, all five of their children had attended and graduated from the college of their choice. Through his adult life, Rex worked a variety of jobs around the Oklahoma City area. Some of his employment included being crew chief at Hardees, an assistant manager at General Cinema and a crew chief and trainer for O’Reilly’s Auto Parts. Unfortunately, because of health issues, he had to take early disability retirement. As a child, Rex accepted Jesus Christ as his personal Savior and was baptized at the First Baptist Church in Red Rock, Oklahoma. He was a faithful servant of the Lord, relying on Him during his personal and physical challenges. Currently, he was a member of New Covenant Methodist Church in Edmond, Oklahoma. His favorite Bible verse was “I can do everything through Him who gives me strength.” Philippians 4:13 (NIV) On November 2, 1991, Rex was united in marriage with Cynthia Brown. To this union, God blessed them with a son, Benjamin Scott, on July 11, 1995. Rex spoke often on Ben and loved him as only a father can. Rex had a loving heart and sense of humor. He always tried to keep a light-hearted view of life, especially as he struggled with his declining health. He enjoyed playing card games and fellowship with his friends. It was always a highlight for him when family members would stop to visit or join him for special meals. He loved introducing his family to his friends. Rex is preceded in death by his wife, Cynthia Ratliff and his parents, Orla and Betty Ratliff. He is survived by his son, Benjamin Ratliff of Oklahoma City and his siblings, Sheri Martens of Fairview, Oklahoma, Rhonda Kelly, Marla Ratliff both of Edmond, Oklahoma and Rod Ratliff of Yukon, Oklahoma.

Rex Wade Ratliff was born on January 20, 1965, to Orla and Betty Ratliff in Perry, Oklahoma. He was their fifth child, and his birth completed the family. On Jun 7th, 2022, Rex went to his Heavenly Home to be with his Savior. He spent his... View Obituary & Service Information

The family of Rex Ratliff created this Life Tributes page to make it easy to share your memories.

Send flowers to the Ratliff family.