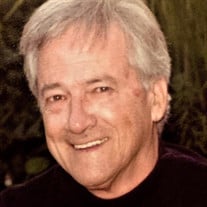 Reginald B. Logan (Reggie) was born on October 23, 1939 in Orangeburg, South Carolina to Ralph and Rosella Logan. After graduating high school, he attended college and played football (running back) at Georgia Tech and Univ. South Carolina. Given that one of his favorite songs to sing was “Ramblin’ Wreck from Georgia Tech”, I think it’s safe to say that his favorite school was Tech. While working on a job as a telecommunication engineer in East Texas, he met his wife, Gail. They married on his birthday, October 23, 1965. Reggie & Gail had a son, Barry “Scott” on November 13, 1968 and a daughter, Kelli DeAnn on November 21, 1970. They lived in Wills Point, TX until 1977, and then planted their roots in Enid, OK for 12 years. Enid was full of many wonderful experiences, memories and friends. Reggie spent many years coaching and traveling with Scott’s sports teams. He was passionate about competition and loved being around the kids he coached. Many of them have shared what fond memories they have of him during those years. Reggie was a man whose faith took precedence; his mornings began with reading God’s word. Attending church was of the utmost importance to him; he took the lead by making it a priority for his family as well as for the traveling baseball teams he coached when they were out of town. He was also a man of true character---honest, intelligent, quick-witted, dependable and steadfast. Remembering some of their favorite moments with their dad, Scott and Kelli recall one that stands out perhaps the most. While putting on his tie for work at 6:00 am, he would often wake them up for school smiling and singing… “When the red, red robin comes bob bob bobbin’ along, There’ll be no more sadness when he starts singing his old, sweet song. Wake up, wake up you sleepy head, Get up, get up, get out of bed. Cheer up, cheer up the sun is red. Live, love, laugh and be happeeeee”. There is no doubt he loved to have fun. He enjoyed watching the Sooners play football, singing, listening to Elvis, playing the ukulele, and was known to be quite ornery. Reggie was also a private person and endured his share of hardships in life often choosing to carry those himself. When his wife, Gail, was diagnosed with Ovarian Cancer, he spent days and nights taking care of her, comforting her and accompanying her to all of her appointments. He was truly a rock and relentless in his care for her. They were married for 45 years until she passed away in 2010. They are now reunited in heaven. Reggie was preceded in death by his beautiful wife, Gail; his parents Mr. & Mrs. R.C. Logan; siblings Joann, Terry and Larry Mitchell (Mickey). His legacy of love for family and God will live on through his son, Scott; Daughter, Kelli and her husband, Shawn; Grandchildren Logan, Zac, Bryce, Carter and Olive. The family of Reggie would like to welcome all able to attend, to the graveside services to remember and celebrate his life on Friday, February 5, 2021 at 2:00PM at Chapel Hill Memorial Gardens in Oklahoma City, OK. There will be a come-and-go visitation held throughout the day Thursday, February 4, 2021 from 8:30AM-5:30PM at Crawford Family Funeral Service in Edmond, OK. Graveside services will be made available via livestream, here on Reggie tribute page, just prior to services beginning. In lieu of flowers the family asks you please consider making a donation in Reggie's memory to either of the below, local, Oklahoma groups. Autism Oklahoma https://autismoklahoma.org/giving-to-honor-someone-special/ Stephenson Cancer Center https://giving.oufoundation.org/OnlineGivingWeb/Giving/OnlineGiving/CancerInst (If able, please select "other" under the "Use my gift for" section, and list Ovarian Cancer.)

Reginald B. Logan (Reggie) was born on October 23, 1939 in Orangeburg, South Carolina to Ralph and Rosella Logan. After graduating high school, he attended college and played football (running back) at Georgia Tech and Univ. South Carolina.... View Obituary & Service Information

The family of Reggie Logan created this Life Tributes page to make it easy to share your memories.

Send flowers to the Logan family.