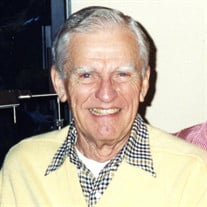 Raybourn H. Smiser, Jr., of Nichols Hills, OK, passed away peacefully at St. Anthony’s Hospital on June 2, 2020. St. Anthony’s is also where Raybourn came into the world, on September 24, 1920. He attended Classen High School and then the University of Oklahoma, where he was President of the Kappa Sigma fraternity. After graduation he joined the U.S. Army as a Lieutenant, serving his country during World War II. He was a lifelong resident of Oklahoma City, and often remarked, “why would anyone live anywhere else, I love Oklahoma City!” Raybourn was married to the love of his life, Mary Vaughn Smiser, for 75 years. Together they raised three children, doted upon one granddaughter, and lived to see two great-grandchildren born. Raybourn contributed to the growing community of Nichols Hills and greater Oklahoma City as a homebuilder and owner of Ray Smiser, Jr. Construction Company. Raybourn’s success in business can be directly attributed to his work ethic and attention to detail. Raybourn was also a member of Westminster Presbyterian Church. There was no one quite like Raybourn. He was so many things, and will be remembered for his devotion to his family, his incredible work ethic, and high standards in all endeavors. He will be greatly missed. In lieu of flowers, donations in his memory may be made to Oklahoma Contemporary Arts Center, P.O. Box 3062, Oklahoma City 73101. The family wishes to express our most extreme gratitude for the excellent care of Raybourn’s around-the-clock caregivers. With love and appreciation, we thank: Peggy, Lien, Rosemary, Laneita, Gail, Bonita, and Lisa (owner of Mary Inspired Personal Assistants).

The family of Raybourn H. Smiser Jr. created this Life Tributes page to make it easy to share your memories.

Send flowers to the Smiser family.