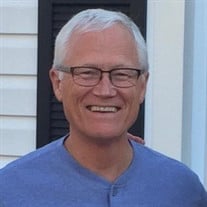 It is with great sadness that the family of Randy York announces his passing after a 4 year battle with early onset Alzheimer’s, on Wednesday, December 5, 2018 at the age of 62. Randy will be lovingly remembered by his wife of 41 years, Jean and his children, Tyler (Leah) and Katelyn. Randy will also be fondly remembered by his three sisters, Cindy (Jimi) Anderson, Angie (Tim) Hopkins, Dana, and brother Kyle (JaLyn). Randy was preceded in death by his son Ryan. Born June 13, 1956 in Garland, Texas; Randy was the son of Joy and Herb York. In his youth, Randy was an active member of First Baptist Church of Oklahoma City. He graduated from John Marshall High School in Oklahoma City in 1974. Randy received a B.S. in Business Administration in 1982 from the University of Central Oklahoma f.k.a [Central State University]. Randy married his longtime friend and love, Jean Ann Wallis, August 12, 1977. Over the course of his career in facilities maintenance, Randy served as the Vice President and General Manager for Siemens Building Technologies, Vice President of EMCOR, Sr. Director and later Vice President of Facility Management Operations for URS and Vice President of Facility Management Operations for AECOM. Randy was a natural born leader and took it upon himself to lead in a way that allowed him to support others. Randy always turned back to help family and friends and actively sought to lighten the loads of all who kept his company. The impact that Randy had on us will forever be felt and never forgotten. His positive attitude and compassion will continue to influence our lives for good. We honor Randy not by only remembering him, but acting as he would and treating others as he did. May we all remember to smile like Randy. A visitation service will be held from 5-7pm on Friday, December 14 and the funeral service will take place Saturday, December 15 at 10am. Both will occur at Crawford Family Funeral Home, 610 NW 178th St., in Edmond. The graveside service will commence on Sunday, December 16 at 2pm at Restland Funeral Home and Cemetery, located at 13005 Greenville Ave. in Dallas, TX.

It is with great sadness that the family of Randy York announces his passing after a 4 year battle with early onset Alzheimer&#8217;s, on Wednesday, December 5, 2018 at the age of 62. Randy will be lovingly remembered by his wife of 41 years,... View Obituary & Service Information

The family of Randy W. York created this Life Tributes page to make it easy to share your memories.

It is with great sadness that the family of Randy York announces...

Send flowers to the York family.