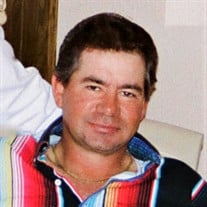 Randy Lee Baty, 65, of Edmond, Oklahoma, passed away peacefully in the comfort of his home, surrounded by his family, Christmas Day, December 25, 2020. He leaves behind his wife, Jan Baty; their son and his wife, Jeff and Stacey Baty; and granddaughter, Kaitlyn Baty. Randy was born on February 16, 1955 in Sallisaw, OK to father Guy Baty and mother Sue Baty, who predeceased him. He grew up in a large family with 3 brothers and 2 sisters. Randy started out working in Construction, but quickly moved into Pipeline. Randy married Jan Matlock on May 20, 1972. They lived in Norman, OK, then moved to several other places until they settled in Edmond, OK. There, Randy and Jan lived and raised their son, Jeff. Randy was ornery and stubborn, pestering his siblings, granddaughter, nephews and nieces any chance he got. He would do just about anything to irritate them, but he sure loved their attention. However, Randy loved his family with all his heart. Randy was a hard working man who loved his job. A short time after starting Construction some of his family members convinced him to go into Pipeline. He found his calling and had loved working pipeline until his death. The last 5 years of working on pipeline, Randy became an Inspector. He was so happy to have his brother in law join him on the job. Randy would say they had some of the best times. He loved music and playing guitar. After being away for awhile for his job, he would come home and play guitar for hours. He was so good at playing and his family enjoyed listening to him play. In high school, Randy was a member of a band and played the drums. The band would play at civic center halls and small places around Gans/Sallisaw. While Randy didn’t cook much, he loved to make jalapeño cornbread. That was his dish to fix and share with others. Randy just really enjoyed being around people. Randy is survived by his wife, son and daughter in law, and granddaughter, as well as his brothers Danny Baty of Muldrow, OK, Thomas Baty and Kathy of Edmond, OK, Jerry Baty of Wausau, Wisconsin; his sisters Gila Brandenberger and Travis of Bethany, OK and Hollie Bankston and Steven of Russellville, Arkansas. He is preceded in death by his parents. A private family service to remember and celebrate Randy’s life will be held on New Year’s Eve, Thursday, December 31, 2020 at 1:00pm at Crawford Funeral Service in Edmond, OK. The services will be made available via livestream.

Randy Lee Baty, 65, of Edmond, Oklahoma, passed away peacefully in the comfort of his home, surrounded by his family, Christmas Day, December 25, 2020. He leaves behind his wife, Jan Baty; their son and his wife, Jeff and Stacey Baty; and granddaughter,... View Obituary & Service Information

The family of Randy Baty created this Life Tributes page to make it easy to share your memories.

Send flowers to the Baty family.