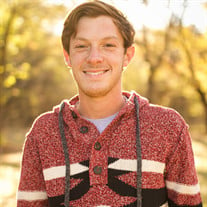 Nick was the most courageous, determined, and sweetest person you would ever meet. He loved life. He lived life. He exemplified the word “strong” – a true warrior. His faith in God was tremendous. Nick often said “I don’t need Luck I have Faith.” Nick was born on September 22, 1998 to Robert Ted Leslie and Lydia Mae Leslie in Oklahoma City. Nick had an older sister, Lauren Leslie and a younger brother, Mitchell Leslie and a niece Elle Leslie. Nick passed away on May 14, 2019 at the age of 20. Nick’s grandparents were Bobby and Carolyn Leslie from Greenwood, South Carolina, Bob and Grace Horton from Houston, Texas. Nick was a survivor of a childhood cancer, Stage IV Neuroblastoma. He battled cancer from 3 years old until he was 11 years old. The cancer never came back. However, the cancer treatments badly damaged his body. He went through more challenges than most adults will ever go through in their lifetime. The past two and a half years were extremely hard for Nick. He desperately kept fighting daily while enduring much suffering. He had a huge drive to live. Most people would have given up, but not Nick. He never gave up. Nick passed away fighting during a transplant surgery. We are so appreciative to all the doctors and nurses who went to battle for Nick and kept fighting alongside him. We are so appreciative of the donor family who gave a wonderful gift to try to help Nick live. After his initial childhood diagnosis, our family adopted the motto “NO REGRETS.” Nick lived with NO REGRETS. Nick had a great life before he got really ill these last couple of years. He enjoyed lots of different activities. He attended Crossing Christian School grade school through 6th grade. He played soccer, basketball, football and baseball during those early years. After moving to Edmond, he graduated from Deer Creek High School in 2016. While at Deer Creek he played on the high school Football and Tennis Teams. He was a leader on Student Council and was so happy to raise money for others. Nick went on to the University of Oklahoma and was majoring in pre-biology/pre-med. His dream was to be Pediatric Oncologist and help others like him. He was so smart and knew more about medical care than most Residents. While at the University of Oklahoma, he was a proud member of the Kappa Sigma Fraternity. He was happy that he was able to live in the house. Nick loved the outdoors. His favorite activities were wake boarding and snowboarding. He was very good at both. Colorado and the Lake Tenkiller were his “happy places.” He planned on living in Colorado as an adult. In addition to a memorial in Edmond, Nick will have memorial in his favorite Colorado town, South Fork. Nick also loved motorcycles. His dad bought him a dirt bike when he was 4 years old, and he’s had bikes ever since. Nick had what we called a “Buddy Bike”, a customized Harley Dyna Superglide and got to ride with his dad. Nick loved to hunt and fish. Nick was creative. He was the family member we would call when we needed something done and done right. We all went to him. He had an interest in woodworking. Without any training, he made the family two tables and ramp for the shed. He enjoyed painting. He had just started getting into video making. He loved to cook and often made his own creations that were super delicious. We also sincerely give thanks to the many dear friends who supported us during all of Nick’s life. So many people have stood by us and have been praying and giving food, money, time, and visits. It has not gone unnoticed. Thank you for loving Nick and our family. Nick and our family have received much love and support from several charitable organizations and would like to give back Soonerthon - Soonerthon.Ou.edu Cavett Kids Foundation – cavettkids.org K club – kclubkindness.org Oklahoma City Ronald McDonald House - rmhc-okc.org Fairhaven Foundation - fairhavenfoundation.org Alex’s Lemonade Stand – alexslemondade.org Family and friends are invited to a reception and visitation for Nick on Monday, May 20th, 2019 from 5 p.m. to 7 p.m. at the Crawford Funeral Service Chapel. Funeral services celebrating the life of Nick will be held on Tuesday, May 21 at 2 p.m. at Crossings Community Church Sanctuary, 14600 N. Portland Ave. Oklahoma City, OK 73134. Memorial donations are currently pending.

Nick was the most courageous, determined, and sweetest person you would ever meet. He loved life. He lived life. He exemplified the word &#8220;strong&#8221; &#8211; a true warrior. His faith in God was tremendous. Nick often said &#8220;I... View Obituary & Service Information

The family of R. Nick Leslie created this Life Tributes page to make it easy to share your memories.

Nick was the most courageous, determined, and sweetest person...

Send flowers to the Leslie family.