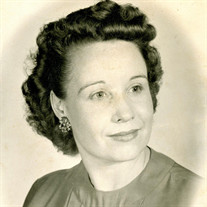 Lucille Bradford was called home softly and tenderly by her Heavenly Father on November 12, 2019 at the age of 93. She was born on October 29, 1926 in the family farmhouse, outside of Crawford, Oklahoma. Lucille was the eldest of seven children, four girls and three boys. She was predeceased by her parents, Charles and Francis Miller, her husband, Otis Bradford, her brothers, Charles and Fred, and her sisters, Melba and Velma. She is also predeceased by her son, Ronald E. Bradford, and her granddaughter, Kimberly M. Sedbrook. Lucille met the love of her life, Otis Bradford, at the age of 15 when they both attended the Crawford School. Otis and Lucille were married shortly before he entered the U.S. Army during World War II. While Otis was serving in the Army, Lucille gave birth to their first child, their daughter Odessa. After Otis returned from the Army, he, Lucille and Odessa lived in their home in Cheyenne, OK. In 1952, they moved from Cheyenne to Elk City, where they remained, making a home for their family until all their kids were grown. In 1972, Lucille and Otis moved from Elk City to their farm outside of Seminole, OK. While Otis continued his career in construction, Lucille was a tag agent in Seminole. All their children routinely brought their kids to the farm on the weekends, to be with their grandparents and have fun. Lucille and Otis both greatly enjoyed having their grandchildren at the farm. Their grandchildren often recount their fond memories of their time there. After selling their farm, Otis and Lucille moved to Jones, OK, where Otis and his sons built their new home. Otis passed away soon after the house was complete. Lucille worked as a tag agent in Choctaw and in Edmond. Lucille decided to move from Jones to Edmond in July of 1999, where she became an active member of the Edmond Road Baptist Church, volunteering to help whenever needed. She was an excellent seamstress and made clothes for her children, grandchildren and for children to wear to their church camp. Lucille’s hobbies included reading, sewing and gardening. She was a voracious reader and always had a book by her side. She took great pride in her flower gardens and landscaping. She left her children, grandchildren and all her friends and family a legacy of devotion to God, loyalty, hard work, and extreme kindness to everyone. Lucille is survived by her sister, Helen Albeyta; her brother, Marvin Miller; her daughter, Odessa L. Knight, her son, Roger Dean Bradford, her daughter, Linda Lee; grandchildren, Shelia Knight Parker, Shelly Knight Peterson, Ronald Bradford, Jr., Katie Bradford Jacocks, Ronald Martin Fenity, Ronald James “Jimmy” Bradford, Roger Bradford, Amy Bradford O’Brian, Lorri Sedbrook, Scott Sedbrook, and many great-grandchildren and great-great grandchildren. The family thanks the Visiting Angels caregivers and Complete Hospice nurses for their kind and professional care of Lucille. Come-and-go visitation for Lucille will be held on Sunday, November 17, 2019 from 1 to 6 p.m. with a reception from 4 to 6 p.m. at Crawford Funeral Service, Edmond, OK. Funeral services will be held on Monday, November 18 at 11 a.m. at the Edmond Road Baptist Church, 1207 W Edmond Rd, Edmond, OK 73003, with a graveside service to be held at 3 p.m. at Fairlawn Cemetery in Elk City, OK. In lieu of flowers, donations may be made to the St. Jude Children’s Research Hospital. St. Jude was very special to Lucille because it cared for and treated her grandson, Bradford Sedbrook.

Lucille Bradford was called home softly and tenderly by her Heavenly Father on November 12, 2019 at the age of 93. She was born on October 29, 1926 in the family farmhouse, outside of Crawford, Oklahoma. Lucille was the eldest of seven children,... View Obituary & Service Information

The family of R. Lucille Bradford created this Life Tributes page to make it easy to share your memories.

Lucille Bradford was called home softly and tenderly by her Heavenly...

Send flowers to the Bradford family.