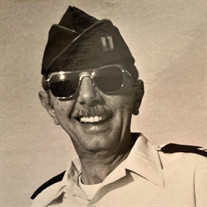 On Father’s Day, Captain Philip Eisel, USAF Ret, father to Pat, Randy, Gregg, Tim, and Wendy, was called home to be with his Eternal Father. Phil graduated High School in Belleville, NJ and immediately joined the United States Air Force which began a proud 26-year career in the military. Phil wanted to see the world and his service afforded him that opportunity, serving in Tripoli, Benghazi, Napoli, Nigeria, Viet Nam, The Philippines, and Germany, as well as Arizona, California, The Pentagon, Mississippi, Texas and finally retiring at Tinker AFB in Midwest City. During his time in the military, he had five children with Joyce Eisel and acquired his Business and Master’s degrees in Human Relations. Retirement never suited Phil and his first “unretirement” was to serve as Vice President of the Del City Chamber of Commerce. Part of his job was to visit local business owners, and, in that capacity, he visited the offices of Domino’s Pizza where he would meet the love of his life, Cathy, and they were married in 1992. Phil retired from the Chamber of Commerce and again “unretired” to work for Dominoes so he could be close to Cathy. Eventually he retired again and, again, retirement did not suit him. Phil said that the only way he would come back out of retirement would be to work in academia and fortuitously, academia called. In a job that seemed created just for him, he went to work for Oklahoma City University as a liaison between the University and military personnel in the Master’s Program. He thrived in a job where he got to be in a university environment as well as spend time on the base mentoring younger members of the military. In time, he would retire again and this time we thought it would stick. It did not. Phil’s last two “unretirement” jobs, working in the cart barn at the Lake Hefner Golf course, parking carts before dawn and drinking coffee with his coworkers, and finally, volunteering his time at Integris Baptist Hospitality Desk, were jobs that probably brought him more joy than any of the others. Phil was a man of great joy, humor, generosity, intelligence, and love. He loved the game of golf and, later in life, to the great dismay of his children, abandoned his desire to watch American football because it was too slow and boring, and he became an avid soccer fan. We never really understood that decision. He taught all his children the value of hard work, family, and education. Of all the things Phil loved, he loved his family the most, and his family was always the central focus of his life. He enjoyed the lives his children, in laws, grandchildren, and great grandchildren and was proud of every milestone in their lives. His hallways, tabletops and refrigerator door could barely hold the weight of the hundreds of photographs that he proudly displayed. Phil is finally together again with Cathy and his family could want nothing more for him than that. He is survived by his sister, nieces, and nephews, his five children and their spouses, eight grandchildren and two great grandchildren, all of whom loved him dearly and will miss him forever. Whether you knew him as Phil, Pop, Dad, Poppy, Skipper, or Captain Eisel, you knew him as a great man. In honor of his proud and dedicated service to The United States Air Force, Phil will be buried at Arlington National Cemetery. The family would like to take this opportunity to thank the entire staff of The Iris Memory Care Facility in Edmond for their tremendous care during this past year. They laughed with Phil, prayed with him, and cried with us at his loss. We appreciate all of you more than you could know. In lieu of flowers, the family requests that donations be made in Phil’s name to The Alzheimer’s Association.

The family of Capt. Philip Eisel created this Life Tributes page to make it easy to share your memories.

Send flowers to the Eisel family.