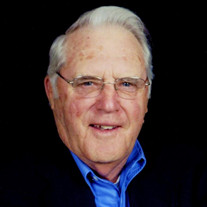 Pete McBroom was born October 19, 1935 to Enoch Leslie and Juanita Alice (Martin) McBroom. He was born in Edmond and attended Chisholm Creek School for eight years then Edmond High School for four years, graduating in the class of 1953. Later, he attended Central State College, graduating in 1961. He married Glenda Louise Haley on November 20, 1997 in Las Vegas. The McBroom family quickly became a part of the extended Haley family. Pete and Glenda enjoyed travelling and went on several ocean cruises together with family and friends. The couple really loved their life together. Though they always lived in Edmond, they loved seeing the scenery in other beautiful places. Pete began driving a tractor when he was five years old. Farming and raising cattle was a big part of his life. He got his first heifer when he was five as well. His dad traded a Shetland pony for a heifer and gave it to Pete. From that point on he was never without cattle until he was forced to sell all the farming tools and cattle in 2009 due to health reasons. He always said, “everybody is put on this earth for a reason” and his was to raise wheat, meat and hay to feed the world. He and his dad were partners in the farming and cattle business until his dad passed away in 1998. It brought Pete great joy to have a father and son relationship like he had with his dad. In 1997, Pete retired from the Oklahoma County Highway Department, District 3, most of his employment spent as assistant superintendent. He took some time off in the early 1980’s to get his Oklahoma Real Estate sales and broker’s license. He mostly sold farms. Pete was a 32nd degree Mason for over 50 years, and a member of Henderson Hills Baptist Church in Edmond. Country music was always a part of Pete’s life and at age 17 he bought a guitar and learned to play it. He spent many hours playing and singing country songs with friends. He even played with a small band that performed in honky-tonks across the state. Many times they were lucky to barely come out ahead by $1.00. Pete also loved to watch westerns and old black and white movies on TV. He spent many happy hours reliving the Wild West. As far as sports went, Pete loved to watch the Rodeo, with Bull riding being his favorite event. And, of course, he loved Thunder basketball. Pete is survived by Glenda, his wife of 45 years. Pete had no brothers and sisters, but was very close to many of his cousins. The couple had no children of their own, but their nieces and nephews more than made up for it along with great nieces and nephews and now great-great nieces and nephews. Pete went to be with his Lord and Savior on June 7 following a lengthy battle with pulmonary fibrosis. Viewing will be on Thursday, June 10 at Crawford Funeral Home, come and go from noon to 5:00. The family will be present from 5:00 to 7:00. Services will also be at Crawford Funeral Home on Friday, June 11 at 10:00 a.m. with interment at Memorial Park Cemetery. The service may be live-streamed at crawfordfuneralservice.com. In lieu of flowers, please consider a donation to the Ministries of Jesus through Henderson Hills Baptist Church, or the American Lung Association.

Pete McBroom was born October 19, 1935 to Enoch Leslie and Juanita Alice (Martin) McBroom. He was born in Edmond and attended Chisholm Creek School for eight years then Edmond High School for four years, graduating in the class of 1953. Later,... View Obituary & Service Information

The family of Pete McBroom created this Life Tributes page to make it easy to share your memories.

Send flowers to the McBroom family.