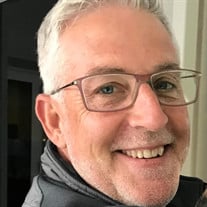 Paul Edward Tidwell, 63 years old, met his heavenly father on May 14th 2022 on his late father’s birthday at his beloved home in Jones, Oklahoma. He was the son of Daniel and Lucy Tidwell of Bartlesville, Oklahoma. He graduated from Bartlesville High School in 1976 and went on to receive a degree in Music from Baptist Bible College in Springfield, Missouri. He married his childhood sweetheart, Kim Clark, in 1979. Paul served the Lord as a youth pastor, music minister, and outreach pastor across Oklahoma and Texas and then transitioned to becoming a successful salesman. He loved to sing and worship the Lord with his beautiful voice and was an avid hunter and fisherman which he enjoyed with his mom, dad, son, and friends throughout his life. He loved the outdoors and pursued many adventures exploring God’s creation. Paul never hesitated to bless his family and friends with his craftsmanship, hard work, labors of love, encouragement, and endless conversation. Paul helped raise his nieces Heather and Shelby following the death of their parents and loved them like his own. He was a mentor and father figure to many people who crossed his path. He adored his family and was the best husband, father, and pops to his grandbabies. Paul cherished spending quality time with his family by enjoying competitive games, cooking delicious meals, dancing and playing with the kiddos, being silly and filling our hearts with joy, laughter, and love. He was preceded in death by his father Daniel Tidwell, in-laws Winona and Bob Clark, brother in-law Mike Clark, and also his sister Cyndee Render. He is survived by his wife Kim and his son Dan of Jones, Oklahoma, daughter Rachel and Jon Kummerfeld of Alice Springs, Australia with his grandchildren Clark, Lucy, and Lena as well his mother Lucy Tidwell of Fort Collins, Colorado, and brothers Phil Tidwell and family, Gary Tidwell and family, brother in-law Scott Clark and family, nieces Shelby Clark, Heather Clark, and Carrie Walters, and nephew Chad Render. Paul was a devoted volunteer for The Tim Tebow Foundation’s Night to Shine ministering to special needs individuals with an unforgettable prom night experience. Donations in his memory can be made to the Night to Shine 2023 event via https://www.timtebowfoundation.org/ministries/night-to-shine#donate. * Services will be made available via livestream here on Paul's tribute page, just prior to services beginning.*

Paul Edward Tidwell, 63 years old, met his heavenly father on May 14th 2022 on his late father&#8217;s birthday at his beloved home in Jones, Oklahoma. He was the son of Daniel and Lucy Tidwell of Bartlesville, Oklahoma. He graduated from Bartlesville... View Obituary & Service Information

The family of Paul Tidwell created this Life Tributes page to make it easy to share your memories.

Send flowers to the Tidwell family.