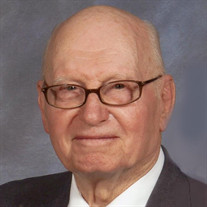 Paul Edward Cole, age 100, passed away on Wednesday, July 15, 2020, in Norman, OK. Paul was born Lewellen Chapin on November 9, 1919, at The Willows Maternity Home in Kansas City, MO. At the age of three months, he was chosen to be adopted by Edward Cole and Minerva Jane Cole, an Oklahoma farm/ranch family. The adoption was official on April 3, 1920, and his name was changed to Paul Edward Cole and he was raised in Haileyville and Peaceable area outside of McAlester. Paul entered active service in the U.S. Army with the 45th Division’s 179th Regiment on January 15, 1941, for a one-year enlistment. On December 7, 1941 just before the enlistment year was over, WWII broke out. On leave from Ft. Sill, Paul married Caroline Randazzo on July 22, 1942, in Krebs, OK. He shipped out of Ft. Sill in Lawton two weeks later and left the United States on October 24, 1942. He served in seven campaigns with the 72nd Signal Corps in Africa, Sicily, Italy, France, and Germany. As Section Chief, he supervised 30 personnel in Service Forces Message Center Section in the European Theater of Operations enciphering and deciphering, encoding and decoding classified messages, secret messages and other forms of communications used by the Army. He obtained the rank of Staff Sergeant. He received the American Defense Service Ribbon, European-African-Middle Eastern Theater Ribbon with one Silver battle star and two Bronze battle stars, Bronze Service Arrowhead, five Overseas Service bars, one Service Stripe, Good Conduct Medal, and Meritorious Unit Award. He would gladly tell you he never regretted his time serving in the Army and was pleased that he made lifelong friends during those years. He would not return to the United States until July 27, 1945, after the war ended. He was honorably discharged September 9, 1945. Paul and Caroline moved to Dewey, OK, in 1947 where they raised their three children. He felt privileged to work with and live close to some of the men he had served with during those years overseas. We, his family, are proud of the sacrifices he and those men made during their years of service. Paul had accepted Jesus Christ as his Lord and Savior at the age of 12 and practiced his Christianity daily his whole life. Paul and Caroline were active members of First Baptist Church of Dewey for 50 years where Paul served as a deacon and was active in the Sunday School leadership. Paul retired from National Zinc in Bartlesville, OK after 35 years. They moved to Oklahoma City in 1998 to be close to their children and grandchildren. After their move, they became active members of Highland Hills Baptist Church. He was a kind and loving husband, father, grandfather, and friend to everyone he met. Paul was preceded in death by his wife of 75 years, Caroline, in 2018; daughter-in-law, Sondra Cole; his parents; three sisters, Viola Aldridge, Josephine Holmes, and Emma Roy; and one nephew, Billy Roy. He is survived by one son, Ron Cole of Okla. City; two daughters, Patty Cowan and husband Steve, and Rita Garrett and husband Robert, both of Edmond; a sister-in-law, Helen Taylor and husband Gomer of McAlester; a sister-in-law, Bitsy Randazzo of McAlester; grandchildren, Carole Holmes (Will), Clint Cowan (Christa), Shane Cole (Denise), Charity Thomas (Madden), Nick Cole (Kaci), Rob Garrett (Emily), and Megan Dalke (Tommy); as well as sixteen great-grandchildren, Shadd, Reanna and Kaylin Holmes; Alexis, Olivia, Carter and Eli Cowan; Caleb and Caroline Cole; Hannah, Cameron and Jackson Thomas; Griffin and Hudson Garrett; and Nash and Laine Dalke. He will also be missed by numerous nieces and nephews. The family would like to thank the staff and medical team at the Norman Veterans Center and Valir Hospice for their wonderful care of our father during the last 3 years. A graveside service honoring his life will be at 9:30am on Friday, July 17th at Chapel Hill Memorial Gardens under the direction of Crawford Family Funeral Service, Edmond.

Paul Edward Cole, age 100, passed away on Wednesday, July 15, 2020, in Norman, OK. Paul was born Lewellen Chapin on November 9, 1919, at The Willows Maternity Home in Kansas City, MO. At the age of three months, he was chosen to be adopted by... View Obituary & Service Information

The family of Paul E. Cole created this Life Tributes page to make it easy to share your memories.

Send flowers to the Cole family.