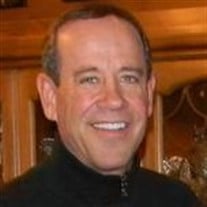 On Saturday, October 23rd, Jesus said “Well done thy Good and Faithful Servant”, and welcomed our loving father and son, Paul, into the gates of Heaven. Paul Russell Anderson, son of Lloyd Wayne Anderson and Dorothy Jo (Mantooth) Anderson was born on March 9th, 1963. Paul attended Purcell Public Schools from 2nd-12th grade and graduated in 1981. While in school, he participated in Boy Scouts and showed a prize-winning pig in 4H. He played the trombone in the high school stage band for 2 years. He also played multiple sports growing up, being a 3-year letterman in Football where he won All-District in 1981, a 3-year letterman in Basketball, and being a 4-year letterman in Golf where he obtained All-Conference for 3 years. After graduating High School, he attended OU for one semester, then “Saw the Light” and moved to Stillwater and became a Cowboy. He continued to cheer for the Sooners and later would become a huge Kansas Jayhawk Basketball fan. At Oklahoma State, he joined the Sigma Phi Epsilon Fraternity, but enjoyed the many friendships he created all over campus. He graduated from OSU in 1985 with a Finance Degree, and later would graduate from Southern Methodist University School of Banking. Paul’s first job out of college was with Amoco in Wyoming. He then went on to make his career in Banking, where he worked for several institutions in Commercial Lending. He was very compassionate about helping eradicate the World’s Water Crisis, so he traveled to Sub-Saharan Africa and brought safe and living water to people. Paul’s selfless acts played a part in bringing water to over 2 million people. Paul enjoyed several hobbies including Golf, where he loved to organize the Ironman Golf Tournament which occurred for almost 20 years at Shangri-La where he played with college buddies and others. He also loved fishing, especially with Uncle Dudley, and enjoyed storm chasing. Later in life, Paul developed a love for singing, writing music, and learning to play several instruments. Among many of the songs he wrote, one was featured in the movie Adventures in Zambezia; which was something he was very proud of. Paul’s greatest love would come in the form of three daughters: Taylor, Morgan, and Gentrey. He loved watching them participate in everything they did. Whether that would be going to Church with them, taking them on many trips including Broadway Shows in New York City, and Oklahoma City, going Snow Skiing in Colorado, visiting Six Flags in Texas where he loved ALL the roller coasters, or attending OU vs. Texas weekends. Over 20 years ago, Paul found his church home and family at Crossings Community Church where he was a member of the choir and the ‘Across The Pond” men’s group.” Additionally, Paul was actively involved in and passionate about leading worship for Living Faith Ministries. The single most important relationship in his life was his relationship and walk with the Lord. In 2010, God placed words on Paul’s heart that would later result in him donating one of his kidneys to Marquise Stewart, the son of his closest friends, Jim and Susan Stewart, whom he cherished deeply. Paul had immense love for people in his life. He loved his people hard and prayed over them constantly. His kind-hearted spirit was loved by many and will be missed. Paul is preceded in death by his grandparents Russell & Roberta, Aunts Sharon and Betty, Uncle Dudley, Cousin Tom-Tom, and dear friend Marquise. Paul is survived by his parents, Lloyd & Dorothy, sister Teka, sister Shana & husband Todd and children, his daughters, Taylor & husband Jacob, Morgan & her husband Brayden, and Gentrey, aunts, Rose and Connie, along with numerous cousins, and friends. In lieu of flowers, the family asks for donations to be made to Living Faith Ministries at 1401 E I-44 Service Rd # A, Oklahoma City, OK 73111.

The family of Paul Russell Anderson created this Life Tributes page to make it easy to share your memories.